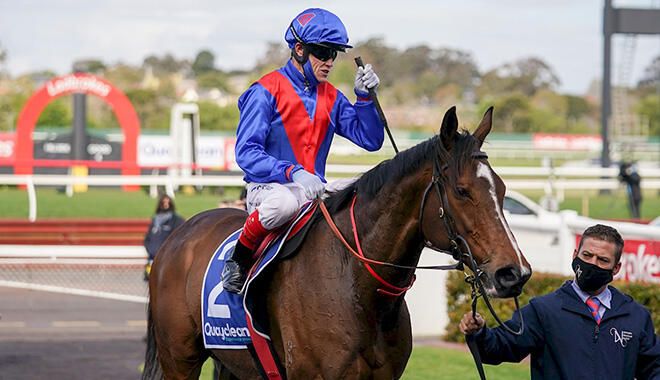 Last year’s Australian Cup winner was quickly gathered in by Zaaki under Craig Williams, who slipped the British import more rein upon straightening.

Zaaki wanted to lay inwards under pressure, with Williams resorting to his whip just once inside the final 300m to keep his mind on the job, as the final 800m was clocked in 46.64s, with Probabeel ($7.50) and Superstorm ($21) filling the minor placings.

“I just love the preparation and the planning that Annabel has done for Zaaki,” Williams said of trainer Annabel Neasham. “I would say after his gallop that Annabel has got him right where she wants him for his main target.”

“Obviously, he covers the ground that well – he’s that athletic – that you don’t actually realise what he’s doing to his opposition,” Williams said. “Probabeel, the four that lined up today, they’re all Group 1 winners.

“He’s really exciting and I’m grateful for the opportunity.”

Neasham’s stable representative Todd Pollard said: “It was always going to be a concern, a bit of a tactical affair. There wasn’t a lot of speed in the race and it was interesting to see Fifty Stars take them up.

“We thought we might have to do all the leg work and have something come over the top of us late. He’s such a good horse, he just tries every time. He’s a marvel to have in the stable.”

“Onto the Caulfield Stakes then the Cox Plate, that’s the grand final,” he said.

“It’s pretty exciting, he’s two-from-two this prep. You talk about the Cox Plate being the grand final, but when he’s winning first-up over 1400m and doing it again second-up, we just want to see him keep the ball rolling.”