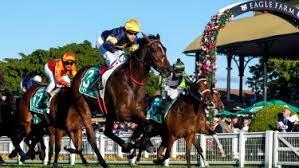 A decision not to sell Tofane at a recent sale has paid a $1 million dividend after the mare flew down the outside to edge out Vega One in the Group 1 Stradbroke Handicap (1400m) at Eagle Farm.

The Mike Moroney-trained mare was listed to be sold at the recent Magic Millions National Broodmare sale until connections took a look at the Stradbroke and had a change of heart and decided to race her on.

Ridden by Craig Williams, who notched his 64th Group 1 success in the race, Tofane chased down the Kingsford-Smith Cup winner Vega One in a thrilling finish to Queensland’s biggest race.

Now the five-year-old mare has reclaimed her best form, the Group 1 Tatt’s Tiara over the same course in two weeks is likely to prove irresistible for connections of Tofane as will a spring campaign.

Williams has been based up in Queensland for the past month and has managed to ride at least one stakes winner each Saturday. But no race in Queensland is bigger than a Stradbroke and Williams said he was delighted he hunted down the ride on Tofane.

“I had to try and restrain her in the race and was inconvenienced in the run and then late she was really strong,” Williams explained.

“She was very gallant. She was the horse that waned to stick her head out more than anyone and now I’ve won my second Stradbroke.”

Williams’ first Stradbroke victory came aboard Sniper’s Bullet in 2007. It was Moroney’s second Stradbroke success, after winning the race with Mr Baritone in 2008, and his 43rd Group 1 overall.