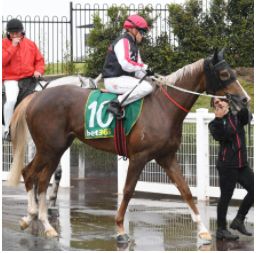 Today I’m riding at Sandown. The rail is out 14 metres on the Hillside circuit and the track is rated in the soft range. There are showers and rain forecast, so it will be interesting to see how the weather conditions alter the racing surface and if there is a track downgrade.

Race 1 is the Ladbrokes Handicap over 1000 metres for two-year-old’s. My ride here is SEYDOUX who is trained by Jim Conlan. This filly by Xtravagant is having her first start today. I’ve seen replays of her three jumpouts, with two of those being on the synthetic surface and one on turf. She looks to have nice natural gate speed and will start from an inside barrier draw. She meets a very competitive field today for her first start and it will be interesting to see how she handles the raceday conditions and pressure for the first time.

Race 2 is the BM70 Ladbrokes Cash In Handicap over 1000 metres for three-year-old’s. My ride here is EL SALTO who is trained by Brent Stanley. This gelding by Written Tycoon has had eight starts for a record of one win and one second placing, with his win coming from his debut run and his second placing at Flemington over 1400 metres in 3YO BM70 grade. He races here third-up this preparation and will be nice and fit from his recent racing. He is dropping back in distance from his first two runs this preparation where he has started favourite in both, so he is obviously pleasing the stable in his work at home. He will start from a middle barrier draw and that should give him every opportunity to return to his best form.

Race 5 is the BM70 MRC Membership Renewal Handicap over 1600 metres for fillies and mares. My ride here is WHITE HIBISCUS who is trained by Danny O’Brien. This four-year-old mare by Animal Kingdom runs in the colours of Dr Gene Tsoi that were made famous by Elegant Fashion, a mare that won the 2003 Hong Kong Derby. White Hibiscus started her career racing in New Zealand before being transferred to Australia where she has been racing very consistently with an overall racing record of two wins and three placings from 11 starts. She has good form on soft ground with a win and two placings from seven attempts. She comes into this after a solid performance first-up where she finished fourth at this track on the Lakeside circuit over 1400 metres in BM70 grade. She has won twice from two attempts second up and looks well placed to continue that record here and on her overall form, will take a lot of beating in this.

Race 8 is the BM64 Ladbrokes Bet Ticker Handicap over 1000 metres. My ride here is ZIAVERA who is trained by Phillip Stokes. This four-year-old mare by Uncle Mo has had 11 starts for a record of two wins and six minor placings and is a model of consistency. She races here second-up this preparation after finishing second when resuming at Cranbourne on soft ground over 1000 metres. She races well second-up with a win and second placing from her two attempts, and she also likes this distance with a win and three second placings from four runs over the short course. She will start from a wide barrier draw, but there should be a lot of speed in this race, and by this time of the day with the rail out it can be an advantage to draw a bit wider in sprint races. On her best form she is the horse they all have to beat.