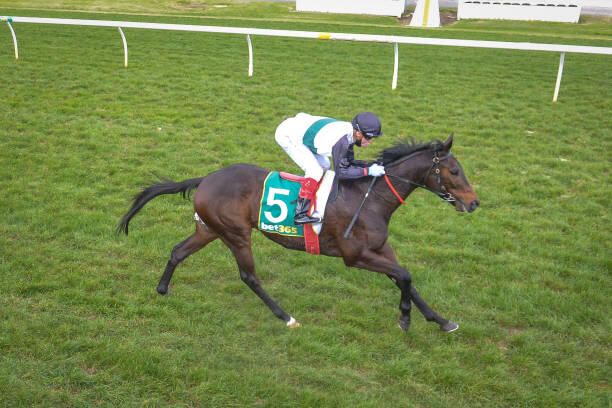 Today I’m riding at Sandown. The rail is out 6 metres on the Hillside course and the track is rated in the good range.

Race 1 is the Class 1 Ladbrokes Same Race Multi Handicap over 1500 metres. My ride here is BAGLIONI who is trained by Greg Eurell. This four-year-old gelding by Cluster is raced by Neville Murdoch. He is lightly raced having had just eight starts for a record of a win and a third placing. He races here fifth up this preparation and is dropping back in grade and distance from his recent runs. He had the blinkers applied for the first-time last start at Flemington where he finished just three lengths from the winner in a three-year-old handicap in what was a solid performance from him, with the blinkers really sharpening him up. He is a horse that needs to have luck in running, which he hasn’t had lately. His lack of early gate speed means that he usually finds himself behind a lot of horses and with clear running he could have easily won his past two starts. He looks well placed in this race and if we have clear running in the straight and he runs up to his best form he will be one of the main chances.

Race 2 is the BM84 Ladbrokes Cash In Handicap over 1000 metres. My ride here is SAPPHIRE CROWN (NZ) who is trained by Colin Little & Matthew Lindsay. This five-year-old gelding by Hallowed Crown has had nine starts for a record of three wins and three placings. He is a horse that I know well, having ridden him twice on raceday and in trackwork in preparation for his races. He is a horse that I felt would always develop with time and now being a five-year-old he should be fully mature. He races here first-up today and has very good form when racing fresh with two wins and a placing from three attempts. He is also a horse that excels on rain affected ground, so any rain prior to his race would be an advantage to him. The last time I rode him under race conditions at this course was two preparations ago and he was very new and got a bit lost running down the hill, but with the benefit of another preparation under his belt hopefully he has matured and gained further experience. On his best overall form and the fact that he will carry the minimum weight of 54 kilos today he should be the horse they all have to beat.

Race 5 is the BM70 IVE > Print Handicap over 1600 metres. My ride here is MR BRIGHTSIDE (NZ) who is trained by Ben & JD Hayes. This four-year-old gelding by Bullbars is a lightly raced and talented galloper that is showing good promise. He has had four career starts for a record of two wins and a second placing, the only time he has missed a top two placing was when he made his debut in New Zealand and he was really unlucky in the run and finished fifth on that occasion. Since arriving in Australia he has started favourite in all three of his runs and hasn’t disappointed his connections. I’ve ridden him in his past two starts which have both been wins at Geelong and then Sandown on the Lakeside circuit over the same distance as today’s race. I felt that he took good confidence and progressed in the right direction after his maiden win at Geelong and was very good in winning again last start. He steps up in grade again today and even though this is a small field, it is of high quality. I expect if he has come on again from last start that he will take a lot of beating in this and I’m looking forward to riding him again as he is an exciting horse going forward.

Race 8 is the BM70 MRC Membership Renewal Handicap over 1000 metres for fillies and mares. My ride here is ZIAVERA who is trained by Phillip Stokes. This five-year-old mare by Uncle Mo is raced by Nicole Agent and partners. She’s had 12 starts for a record of two wins and seven minor placings and is a very consistent galloper. She races here third-up this preparation and both of her runs this time in have seen her finish second over the same distance as this race. I had my first ride on her last start at Sandown where we were beaten by the narrowest of margins in finishing second in BM64 grade. She races up in grade and drops a kilo in weight from last start and has also drawn a more favourable barrier today. She comes into this with a nice gap between her runs and has winning form on good and soft ground. The only consideration will be how the track is playing by her race and if the inside or outside will be the place to be. I’m confident in my horse and if she maintains her consistent form she can win this.