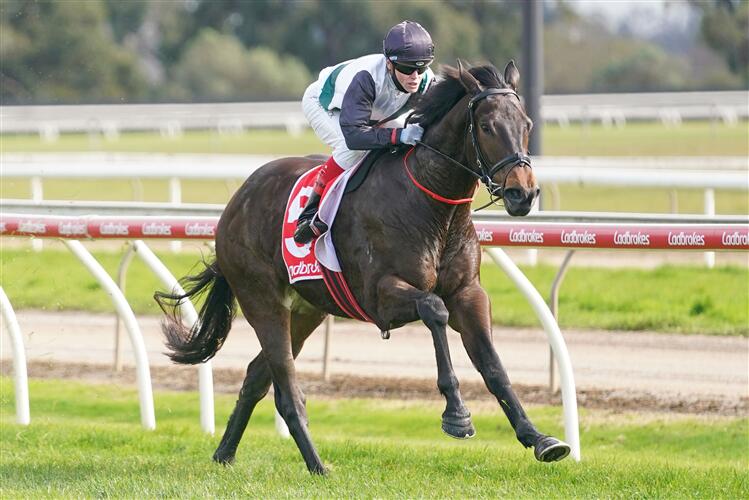 Today I’m riding at Sandown. The rail is out 9 metres on the Hillside circuit and the track is rated in the soft range.

Race 1 is the Ladbrokes Cash In Maiden Plate over 1400 metres for three-year-old fillies. My ride here is BARB RAIDER who is trained by Jerome Hunter. This daughter of Rebel Raider is raced by Graeme Gathercole of Graebar Park. I rode her when she made her debut at Sandown on the Lakeside track at the start of the month over 1200 metres in BM64 grade. She was tailed off and detached from the field going down the hill, but when she concentrated and put her mind into being competitive and racing she was very good in her effort to the line to only finish a length-and-a-half from the winner in third placing. She returns to maiden grade today and the step up in distance will be to her advantage. With natural improvement in fitness and experience she can win this as I was impressed with her debut effort.

Race 2 is the BM64 Ladbrokes Switch Handicap over 1400 metres for three-year-olds. My ride here is SANDY PRINCE who is trained by Ben & JD Hayes. This gelding by Pride of Dubai has had four starts for a record of one win and three second placings. I’ve ridden him in his two runs this campaign, we finished second first-up at Geelong behind the promising horse, The Garden, in what is proving to be a very strong form reference. His next start was at the Cranbourne meeting that was transferred to Moe where he won his maiden on heavy ground over 1200 metres in a dominant effort. He had a gear change on that day with his Nose Band and he still did a few things wrong. I’m looking forward to riding him again today on a firmer surface and he comes into this with a confidence building last start win. He will be at peak fitness for his third-up run and in this small but competitive field I expect he will be hard to beat.

Race 3 is the Class 1 Ladbrokes Blended Multi Handicap over 1300 metres. My ride here is MONTANA FLASH who is trained by Michael, Wayne & John Hawkes. This three-year-old gelding by Star Turn is raced by Rupert Legh and partners. He is a six-start maiden who had been competing at higher grades including in some Group and Listed races as a two-year-old in his six career runs. I rode him two starts ago when he was a colt at Sandown to finish third in a 2YO Handicap and he had one more run in that campaign before being sent for a break from training and was gelded. I rode him first-up this preparation on July 31st in a 2YO colts and gelding handicap at Moonee Valley over 1000 metres to finish fourth just over two lengths from the winner. He steps up in distance today which should suit him at this stage of his preparation and if he has come on from his first-up run he can be one of the main chances.

Race 8 is the BM78 Thank You MRC Members Handicap over 1300 metres. My ride here is MINYINGA who is trained by Jamie Edwards. This seven-year-old mare by Elzaam has had 36 starts for a record of five wins and nine placings. She is a mare that I know well having ridden her throughout her career and have multiple race wins and placings on her, with the only time she has been disappointing for me was over the straight course at Flemington which she just didn’t handle. This race is over her favourite distance with a record of three wins and three second placings from 11 runs over the 1300 metres. I rode her last start at Moonee Valley over 1200 metres where she was really strong through the line, so the step up in distance to her favourite trip will suit her. She looks well placed in this race today with the barrier draw and weight to her advantage and she will be very competitive in this.