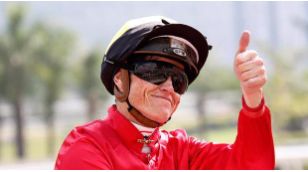 Today I’m riding at Sandown. The rail is out 3 metres on the Lakeside circuit and the track is rated in the soft range.

Race 2 is the BM70 Ladbrokes Cash In Handicap over 2100 metres for fillies and mares. My ride here is SUBLIME MISS who is trained by Ciaron Maher & David Eustace. This five-year-old mare by Not a Single Doubt is lightly raced having had 14 starts for a record of two wins and three placings. One of her second placings was two starts ago when I rode her at this course and distance on heavy ground. She got back in the field on that day and closed the race off really nicely running into second placing. She stepped up to 2400 metres at her next start at Bendigo and finished just behind the placings in sixth and only 2.5 lengths from the winner. She now comes back in distance so she will be extremely fit for her fifth run this preparation. She will start from a wide barrier draw and finds herself in a race where she is well weighted. If the track is racing evenly and she runs up to her consistent form she can be one of the main chances.

Race 4 is the BM64 Ladbrokes Bet Ticker Handicap over 1400 metres. My ride here is TOYETIC who is trained by Anthony & Sam Freedman. This four-year-old gelding by Sebring runs in the colours of Pinecliff Racing. He’s had seven starts for a win and second placing, with his win coming at this track over 1200 metres when he was a 2-year-old. I had my first ride on him two starts ago when he resumed this preparation at Sale over 1200 metres where he was ridden back and off the speed after drawing a wide barrier. The track pattern on the day was definitely against us racing back and coming out wide, but under those conditions he closed the race off really well to finish fourth. He then stepped up to 1300 metres for his next run at Sandown on the Hillside track, where again he started from a wide barrier and came from back in the field to close the race of well to finish fourth. He races here third-up this preparation and is stepping up slightly in distance again and will start from a mid to wide barrier draw. He has a gear change today with the blinkers going on for the first time which will hopefully help him. He is a horse that looked to have good ability early in his career but he’s had a few setbacks along the way. This certainly looks to be a race where he can make his presence felt if he can find his best form and the blinkers have the desired outcome.

Race 6 is the BM78 Ladbrokes Easy Form Handicap over 2100 metres. My ride here is PERENNIAL (NZ) who is trained by Peter Moody. This five-year-old mare by Per Incanto is raced by Haunui Bloodstock and partners. She’s had 19 starts for a record of three wins, nine second and two third placings. She was very consistent without winning for some time but managed to break through again two starts ago at this course and distance for her third win in a BM70 for fillies and mares. I had my first ride on her last start at Flemington where she stepped up to open BM78 company and we didn’t have any clear running in the straight, so it was a complete forgive run. I’m looking forward to riding her again and repaying her connections with a clear run and hopefully getting the win. I like the fact that she is returning to the course and distance of her most recent victory, but she is racing on a firmer surface today and she is yet to win on soft ground, but she has placed in soft conditions. She will start from a low barrier draw today and has the benefit of racing with the light weight of 54.5 kilos. On her best form she is one of the main chances in this race.

Race 7 is the BM70 Ladbrokes Same Race Multi Handicap over 1200 metres. My ride here is THE GENERAL (NZ) who is trained by Richard Laming. This five-year-old gelding by Charm Spirit has had seven starts for a record of two wins and two placings, with his two wins being over the short course distance of 1000 metres. He races first-up today and is resuming as a gelding and racing over the 1200 metres for the first time. His recent official trial performance at Cranbourne was very impressive where he won his heat by 2.5 lengths. He is a horse that has really good speed and when he won his two races he went forward and led all the way. He will start from a low barrier draw today and it’s good to see him back racing as he is an exciting prospect. If he runs up to his trial effort and based on his overall form he will take a lot of running down in this.

Race 8 is the BM78 MRC Membership Handicap over 1400 metres. My ride here is AIDENSFIELD who is trained by Ben & JD Hayes. This four-year-old mare by Dissident has had 10 starts for a record of two wins and four minor placings. Her two wins have come over the distance of 1200 metres but of her four attempts over the 1400 metres of this race, she has placed three times. I rode her last start at Flemington in BM84 mares company over 1400 metres where we finished second to Turaath, who looks to have stakes grade ability and was very impressive in winning by 3.75 lengths. Aidensfield will start from a wide barrier today so we will need luck in running, but on her overall performances she has some of the best form lines for this race.