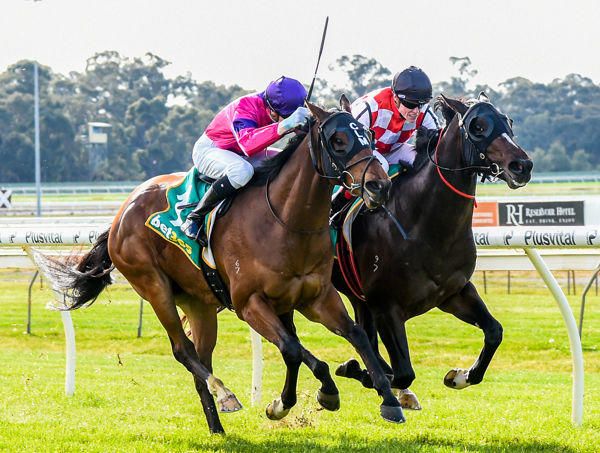 Today I’m riding at Sandown on the first day of Spring.

The rail is out 10 metres on the Lakeside circuit and the track is rated in the good range. Race 1 is the Ladbroke It! Maiden Plate over 1200 metres for three-year-olds. My ride here is PROWLING who is trained by Greg Eurell. This gelding by Wolf Cry is making his debut today. I rode him in his most recent jumpout on a heavy track at Cranbourne where he won his heat nicely. He didn’t really enjoy the heavy track conditions so that adds merit to his performance on the day. He is a horse that has shown nice ability throughout his education process and if he brings that to the races he will be very competitive in this.

Race 2 is the Ladbrokes Easy Form Maiden Plate over 1400 metres for three-year-old fillies. My ride here is CALIPER who is trained by Ken & Kasey Keys. This daughter of Star Witness has had two starts and I’ve ridden her in both. She made her debut in the Group 2 Blue Diamond Prelude as a two-year-old where she started from an outside barrier and was ridden back in the field. She had no favours in the run and after making a mid-race move showed good tenacity and ability in her effort to finish 6 lengths from the winner. She was then sent for a break from training and returned as a three-year-old to trial officially at Cranbourne before running first-up at Moonee Valley. She found herself in a very strong 3YO Fillies Handicap race at Moonee Valley, where again we started from a wide barrier and she found herself back off the speed, a long way off the second last horse and detached from the field. She gave me a really good feel when she started to close the race off and put in a solid effort to finish just over two lengths from the winner. She is stepping up to 1400 metres for the first time today and again will start from a wide barrier. I’m really confident in her ability and if she has taken natural improvement from her first-up run she will be the horse they all have to beat.

Race 3 is the Class 1 Ladbrokes Same Race Multi Handicap over 1400 metres. My ride here is RANMARD who is trained by Sarah Zschoke. This five-year-old gelding by Kaphero has had seven starts for a win and two placings. He races here second-up this preparation and finds himself in a Class 1 race that has quite a bit of depth to it. He has drawn a high barrier and we will need luck in running at his first attempt over this distance range.

Race 4 is the BM70 Ladbrokes Bet Ticker Handicap over 2400 metres. My ride here is REFLECT THE STARS who is trained by Danny O’Brien. This six-year-old mare by Starspangledbanner runs in the colours of Rosemont Stud. She’s been a model of consistency throughout her career with a record of three wins and ten placings from 26 starts. I’ve ridden her at her past two starts where we finished second in both, two starts ago in the VOBIS Gold Stayers race and last start at Moonee Valley where she was beaten by the progressive galloper Smokin’ Romans. This is the first time in a long time that she drops back to BM70 grade and she is well weighted and placed in this race. It would great for her to get another well-deserved win today and if she runs up to the form of her past two starts she will be winning this.

Race 5 is the BM70 MRC Membership Guarantee Handicap over 1600 metres. My ride here is HASSELTOFF who is trained by Robbie Griffiths & Mathew de Kock. This five-year-old gelding by Toorak Toff is raced by Australian Thoroughbred Bloodstock and partners. He is lightly raced for his age having had 13 starts for a record of two wins and eight minor placings. He races here third-up this preparation and I had my first ride on him last start at Flemington in BM84 company over the mile where we finished fifth and just over two lengths from the winner. He comes into this with a nice gap between his races looks well placed dropping back to BM70 grade. His last three runs at BM70 level have seen him finish with a win and two second placings, so he is back to his right grade of race today. If we have luck from a tricky barrier draw and he runs up to his best form he will be one of the main contenders today.

Race 7 is the BM70 Ladbrokes Handicap over 1200 metres. My ride here is NARVAEZ who is trained by Gai Waterhouse & Adrian Bott. This four-year-old gelding by Vancouver has had 14 starts for a record of two wins and four minor placings. He is a horse that I have won on previously at Bendigo and his other win came at this track over 1600 metres last preparation. He runs first-up today and is resuming as a gelding. He also has a gear change with the visors being replaced with blinkers again. From three attempts first-up he has placed twice but has only raced over this distance once previously, where he was unplaced. He will start from a favourable barrier draw and is a horse that likes to make his own luck by racing on-speed. If he is able to dictate terms and control this race he will take a lot of running down.

Race 8 is the BM70 Ladbrokes Punter Assist Handicap over 1400 metres. My ride here is AMFISSA (NZ) who is trained by Chris Waller. This four-year-old gelding by Mongolian Khan has had 10 starts for a record of two wins and a third placing. His two wins have been over this distance and one of those was also at this track on the Hillside course. He is dropping back in distance today from his past two starts which have been over the mile to 1400 metres which is the distance that saw him win three starts ago. He has drawn a low barrier draw which will give him an economical run in transit and he will get every opportunity to return to winning form.