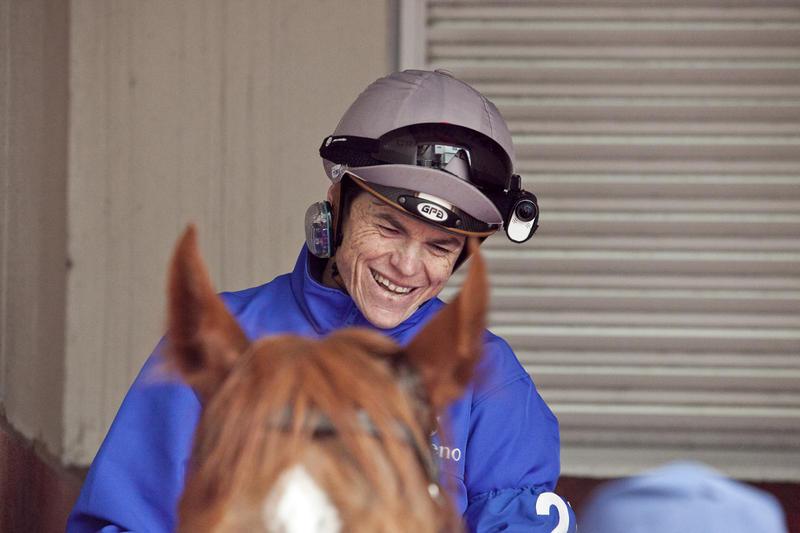 Today I’m riding at Sandown on the Lakeside circuit. The rail is out 2 metres and the track is rated in the soft range. There is typical extreme Melbourne weather forecast for today where it’s possible we could get strong winds, rain and even hail, so it will be interesting to see how it alters the racing surface.

Race 1 is the Ladbrokes Go The Distance Handicap (Maiden) over 1400 metres for three-year-old fillies, my ride here is AND SHE WAS who is trained by Ken & Kasey Keys. This daughter of Shamus Award is having her first race start. I have ridden her in a jumpout in preparation for her debut and she gave me a nice enough feel. She has had another jumpout since I rode her and we see her for the first time under race conditions today. If she handles the day and has luck from an outside barrier then she should be able to make her presence felt in this competitive maiden.

Race 3 is the Class 1 Ladbrokes Switch Handicap over 1300 metres, my ride here is EARLY MORNING RISE (NZ) who is trained by Danny O’Brien. This four-year-old mare by Fastnet Rock runs in the colours of Waikato Stud. She started her career racing in New Zealand and since arriving to Australia has been racing consistently, winning her maiden at her second start of a campaign that consisted of six runs. I had my first ride on her in a Group 3 race at Moonee Valley over 1200 metres where she finished less than 2.5 lengths from the winner, I felt that the tight turning circuit of Moonee Valley didn’t suit her at that point of her career adding further merit to her effort. She races here first up this preparation and I have ridden her in a recent jumpout at Flemington and was impressed with how she went. She will start from a wide barrier and it will be interesting to see what the instructions are from the draw. If she brings her best form today she will be one of the main chances. It’s worthwhile noting that she is unplaced on soft and heavy ground from two attempts, so it will be interesting to see how the track plays and how she handles the conditions.

Race 8 is the BM78 Ladbrokes Handicap over 1200 metres, my ride here is SIMPLY OPTIMISTIC who is trained by Trent Busuttin & Natalie Young. This six-year-old gelding by Encosta de Lago is raced by Keith and Brendon Hawtin. I had an association with the Hawtin family when I was a stable rider for one season in Dubai many years ago, and it would be nice to be able to repay them today with a win. SIMPLY OPTIMISTIC races first up here and has a record of three wins from five attempts when racing fresh. Even though he is consistent and competitive on all surfaces he does relish soft and heavy ground. He will start from a middle barrier draw and there does look to be a good amount of pressure and speed in this race, which will suit his run style. With luck in running and on his best form he can win this first up.