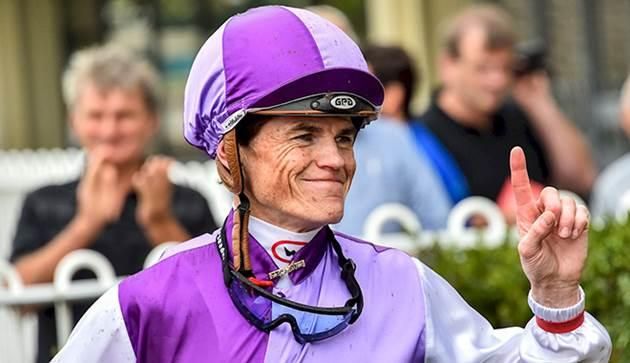 This afternoon I’m riding at Sandown for the twilight meeting. The rail is out 4 metres on the Lakeside circuit and after heavy rain this week, the track is rated in the soft range. There is a cut-a-way rail in the straight today at the 400, which allows horses behind the speed to choose if they take that option for clear running, or continue to make ground to the outside.

Race 1 is the Ladbrokes Maiden Cash In Plate over 1200 metres, my ride here is DIAMONDS’N’STONES who is trained by Michael, Wayne & John Hawkes. This three-year-old gelding by Brazen Beau is raced by Rupert Legh and partners. He’s had three starts for two second placings, with both of his placings being from his two runs last campaign on soft ground. He resumed this preparation at Moonee Valley on December 4thand after starting from a wide barrier sat outside of the leader, to be beaten by just over three-and-a-half lengths. He will be fitter for that run and unfortunately, he will start from a wide barrier again today and we will need luck in running. The form from his last start has been franked with Real Gun winning a maiden at Caulfield last Wednesday, so on that form and with natural improvement from his first up run he will be one of the main chances.

Race 2 is the BM64 IVE > Print Handicap over 1600 metres for three-year-old’s, my ride here is IMPERIAL HILTON who is trained by Patrick Payne. This gelding by The Factor runs in the colours of Larneuk Stud. He’s had two starts, winning on debut at Ballarat over 1200 metres and I rode him last start at Sandown over 1400 metres to finish second, less than two lengths from the winner. I liked the feel he gave me last start and he should appreciate the step up in distance. He goes up 1.5 kilos in weight from last start and will start from an inside barrier. He looks well placed today and will take a lot of beating in this.

Race 6 is the BM70 Quayclean Handicap over 1600 metres, my ride here is LARRIKIN who is trained by Brian McGrath. This six-year-old gelding by Poet’s Voice has had 42 starts for a record of eight wins and three placings and has been a consistent galloper throughout his career. I rode him first-up this preparation when he resumed after a long lay-off, he was able to make use of his inside barrier draw in the early stages but we didn’t have clear galloping room in the straight. I was really impressed with his run in the circumstances to finish 2.65 lengths from the winner. He will start from a favourable barrier draw today and is stepping up to the mile for his second up run, which is a distance he is very effective over. If he runs up to his first up effort and has luck in running, there is no reason why he can’t win this.

Race 7 is the BM64 Ladbrokes Odds Boost Handicap over 2100 metres, my ride here is JOHANDOUGH who is trained by Thomas Carberry. This four-year-old mare by Turffontein is lightly raced with a record of one win and six placings from 14 starts. She races here third-up this preparation after finishing fourth and second respectively in Class 1 company over 1600 and 2000 metres. She looked to race keenly last start and has the addition of a cross-over noseband to her head gear for the first time today. She will start from a wide barrier draw, but she has really solid form and if we have luck in running I expect she will make her presence felt.

Race 8 is the BM64 Ladbrokes Handicap over 1200 metres, my ride here is DUNE FIELD (NZ) who is trained by Jamie Edwards. This four-year-old gelding by Shamexpress has a consistent record of two wins and three placings from just 10 starts, and I’ve ridden him in both of his wins and for a second placing. Both of his wins have been at Sandown and if he brings his form from last start where we were narrowly beaten at Moonee Valley into this, he will take a lot of beating and I’m looking forward to maintaining my good record of him.