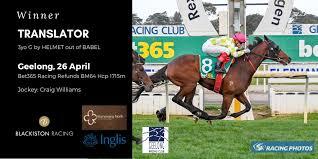 Today I’m riding at Sandown for the twilight meeting on the Lakeside circuit. The rail is out 7 metres with a cut-away-rail from the 400 metres to the winning post in the straight, and the track is rated in the soft range.

Race 1 is the Ladbrokes Cash In Maiden Plate over 1200 metres, my ride here is JOHNNY ANGEL who is trained by Aaron Purcell. This lightly raced gelding by I Am Invincible has had six starts for a record of two seconds and a third placing. I had my first ride on him last start when he was third-up this preparation in a similarly strong maiden at Caulfield where we finished second. He is a horse that seems to make his own luck in running over these distances and he was solid through the line last start. He will start from a middle barrier draw against this small but very competitive field of maiden gallopers, and if he holds his form will take a lot of beating in this.

Race 3 is the Class 1 Clanbrooke Racing Handicap over 1300 metres, my ride here is FIERY RED who is trained by Gai Waterhouse & Adrian Bott. This four-year-old gelding by Pierro has had eight starts for a record of one win and a third placing. Out of his eight starts he’s had two runs in Victoria, one as a three-year-old at Moonee Valley and more recently, first-up this preparation at Geelong where he finished third out of four runners on heavy ground over 1200 metres and only 1.9 lengths from the winner. He will start from a wide barrier draw and is a horse that usually races on-speed. He will have taken natural fitness improvement from his first-up run on heavy ground and should appreciate the slight step up in distance today.

Race 4 is the Class 1 Thoroughbred Club Handicap over 1500 metres, my ride here is YUKON who is trained by Michael, Wayne & John Hawkes. This three-year-old gelding by Vancouver is raced by Rupert Legh and partners. He’s had two starts and made a winning debut in New South Wales over 1350 metres at Wyong. His next start saw him finish third in Class 1 company over 1400 metres at Kembla Grange where he finished 1.8 lengths from the winner. He is a lightly raced and progressive three-year-old and this will be his first start the Melbourne way of going. He will start from a favourable barrier draw and this race looks a nice option for him as he continues to progress through his grades.

Race 5 is the BM64 The Big Screen Company Handicap over 1600 metres, my ride here is LARRIKIN who is trained by Brian McGrath. This seven-year-old gelding by Poet’s Voice has raced 43 times for a record of eight wins and three placings. I’ve ridden him both of his runs this preparation, with both of those being at this course. The mile is his most preferred distance as from 11 attempts he’s won five times and placed once at this range. Last start he raced at the same course and distance as today’s race finishing a length from the winner in fourth placing. He drops from BM70 grade last start to BM64 grade today and goes up three kilos in weight. He is very well placed in this race and on his best form is one of the main chances.

Race 6 is the BM70 Quayclean Handicap over 2100 metres for fillies and mares, my ride here is JOHANDOUGH who is trained by Thomas Carberry. This four-year-old mare by Turffontein is lightly raced for her age and has a race record of one win and seven placings from 15 starts. She races here third-up this preparation and I had my first ride on her last start at this course and distance in open BM64 grade. She is racing up in grade today, down in weight and returns to racing against her own sex. She can be anxious and keen in running and has some change to her head gear today including the cross-over noseband coming off, and pre-race ear muffs and tongue tie going on for the first time which hopefully can help her. I understand her better having ridden her last start and that will hold me in good stead for today’s assignment. If the gear changes work to her advantage and help her to relax and conserve her energy, then I am confident she will be winning.

Race 8 is the BM70 MRC Membership Hcp over 1400 metres, my ride here is TRANSLATOR who is trained by Nigel Blackiston. This four-year-old gelding by Helmet is lightly raced having had 12 starts for two wins and two minor placings. He is a horse I know well and from my five rides on him have a record of two wins and a third placing. He won his maiden first-up last preparation at this course over 1600 metres as a three-year-old and went on to win again at his next start at Geelong against the older horses in BM64 grade. He then progressed to a three-year-old handicap at Caulfield where we finished third and just over a length from the winner. He then seemed to train off and didn’t perform as well at his next two starts and was subsequently sent for a break from training. I’m really looking forward to seeing how he presents for his first-up run this preparation and how he performs. He is a horse that I have a lot of time for and he’s always given me the feel of a galloper with above average ability and it will be good to see how he has matured into a four-year-old.