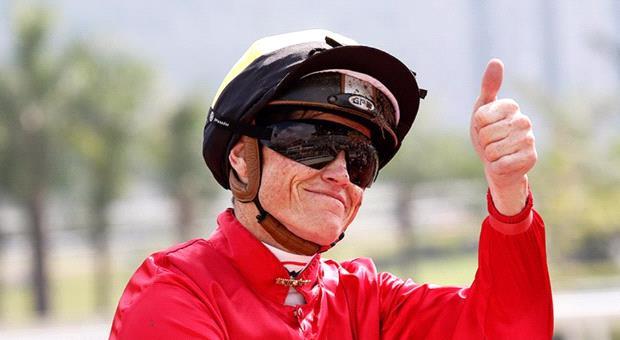 This afternoon I’m riding at Sandown on the Hillside track for the twilight meeting. The rail is out six metres and the track is rated in the good range.

Race 1 is the Ladbrokes Maiden Plate over 1300 metres, my ride here is HAPPY WINNER who is trained by Michael, Wayne & John Hawkes. This three-year-old gelding by Hinchinbrook has had two starts both in his last preparation. He ran fourth on debut at Geelong over 1250 metres before stepping up to 1300 metres at Bendigo where he went forward and made all the running, before fading late and was disappointing in his performance. He resumes after a spell today and has jumped out nicely at Flemington in preparation for his return to the races. He will start from barrier one and will gain an economical run throughout. I’m looking forward to having my first ride on him and if he runs up to his jumpout form he will take a lot of beating.

Race 2 is the Class 1 IVE > Print Handicap over 1400 metres, my ride here is DEBBONAIRE BOY who is trained by Ben Brisbourne. This four-year-old gelding by Supreme Class has had six starts for a record of one win and two placings, with his best results coming from his three runs this preparation. He races here fourth-up today and comes into this with confidence from his last start win over 1300 metres. He is stepping up from maiden to Class 1 company and this will be his first attempt over the 1400 metres. He will start from a wide barrier in a small field and if we have luck in running I’m sure he can measure up in this grade.

Race 3 is the BM64 Thoroughbred Club Handicap over 1500 metres, my ride here is FONTEIN DIAMOND who is trained by Ben Brisbourne. This four-year-old mare by Turffontein has had 12 starts for a record of three wins and three placings. She is deep into her racing preparation having had five runs but her races have been spaced out nicely and she has won twice earlier in this campaign. She is a very consistent mare who seems to make her own luck by racing close to the speed and I’m sure she will continue that consistent form again today.

Race 7 is the BM64 MRC Members Handicap over 1300 metres, my ride here is BIANCONI MAGIC who is trained by Jerome Hunter. This five-year-old gelding by Bianconi is raced by Graebar Park. He’s had 21 starts for a consistent record of four wins and five placings. I rode him last year when he was stepping slowly from the barriers and if the races were run to suit him he was able to close off really well and I was placed on him at Sandown and Flemington. After watching his replays from this preparation, he has had a change to his head gear and is stepping on terms and is able to settle on or close to the speed. This is a competitive field but on his best form he will take a lot of beating in this.