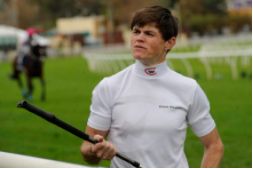 This evening I’m riding at Pakenham for the night meeting. The rail is out 5 metres from the 1000m to the winning post and 3 metres for the remainder with the track rated in the soft range.

Race 2 is the Watch Live on Sportsbet Maiden Plate over 1600 metres. My ride here is PITCHANUN (NZ) who is trained by Danny O’Brien. This three-year-old filly by Savabeel is raced by Robert Anderson. She’s had three lifetime starts for two placings. She made her debut last year before being sent for a spell and has had two runs this campaign. I’ve ridden her in both starts this time in and both have been at this track over 1200 and 1400 metres respectively. She finished third first-up and at her most recent start was beaten by a promising horse to finish second. I felt that she had taken significant improvement from her first to second runs and stepping up to the mile tonight will suit her. If she runs up to her recent form she should be too good for these with the benefit of an inside barrier draw.

Race 3 is the Kaduna Park Estate 4YO & Up Maiden Plate over 1400 metres for four-year-olds and upwards. My ride here is RICH SUN who is trained by Alexander Rae. This four-year-old gelding by Danerich is raced by my mother Glenda and sister-in-law Michelle. He’s had one start where he finished second on soft ground at Yarra Valley over 1200 metres. I rode him in an official trial prior to his debut run where he won his heat and he then won another trial prior to making his debut. He will have taken natural fitness improvement and racing experience from his first-up run and if we have luck in running from a wide barrier draw he should take a lot of beating in this.