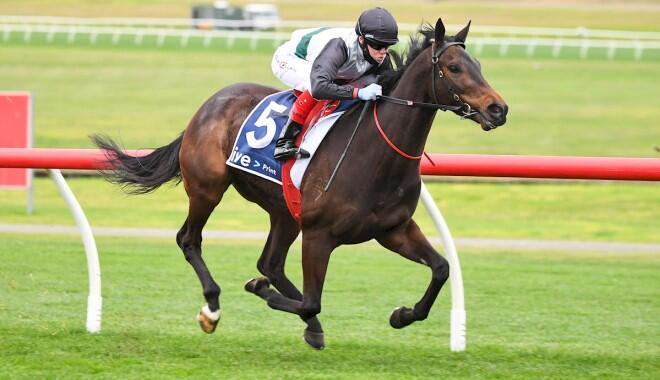 The Ben and JD Hayes-trained Mr Brightside continued his rapid ascent in the ratings on Wednesday, winning his third-consecutive race, the $50,000 IVE > Print Handicap (1600m) under Benchmark 70 conditions at Sandown Hillside.

The four-year-old Bullbars gelding raced on Good ground for the first time at his fifth start but that proved no issue as Craig Williams positioned him behind early leader Amfissa, slid under the pacemaker on straightening and sent him clear for a 1.5-length victory.

Eagles Crag firmed from $3.30 to $2.90 to remain unbeaten from three Australian starts for OTI Racing and closed admirably down the centre of the track under Jamie Kah, giving the impression of further fitness improvement to come later this campaign.

“He’s been very well placed, very well managed and I love the way his attitude is going the right way,” Williams said of Mr Brightside.

Mr Brightside was acquired by clients of Lindsay Park Racing after finishing fifth in a Matamata maiden last February behind Comme Bella Fille, who was coincidentally purchased by OTI Racing following the race.

Mr Brightside lost at his Bendigo debut over 1400 metres but has won his next three starts under Williams, with a maiden victory at Geelong over 1447m followed by mid-week wins at both Sandown tracks over the mile.

“It always takes a good horse to win three races in a row and we do have a nice opinion of him,” JD Hayes said.

“It was lucky that the gaps opened up (in the straight), he took a needle-eye gap, showed a nice turn of foot, which is probably why he’s winning all these races as he can really let go with a good turn of foot, and gap his rivals. It was nice to see him do that today.”

Ben Hayes suggested after Mr Brightside’s previous Sandown Lakeside win that he had Group 1 potential and reminded him of 2016 Toorak Handicap winner He’s Our Rokkii, who was also sourced by the stable from New Zealand as an inexperienced horse.

The comments prompted a $1000 bet on Mr Brightside to win this year’s Toorak Handicap at $34 with Sportsbet. However, that punter may not be due to collect based on JD’s pragmatic assessment on Wednesday.

“We obviously highlighted last start that we’ve got a good opinion of him,” JD Hayes said.

“He might be another year away from getting to those high-quality races but we’ll take him through his grades. There’s nice prizemoney to collect before we take on the big boys.