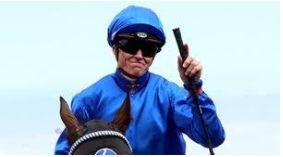 This evening I’m riding at Moonee Valley where it’s the first night meeting for the season with the feature race being the Group 1 Moir Stakes. The rail is out 4 metres and the track is rated in the good range.

Race 1 is the Four’N Twenty Plate over 1200 metres for three-year-old colts and geldings run under set weight and penalty conditions. My ride here is PROWLING who is trained by Greg Eurell. This gelding by Wolf Cry has had two starts for a win and third placing and I’ve ridden him on both occasions. I rode him in a jumpout on heavy ground prior to his first start and liked the way he performed. He made his debut at Sandown in a 3YO maiden over 1200 metres on good ground and finished just over a length-and-a-half from the winner in third placing. He was keen and very new to it all in running and his performance was solid in a strong maiden. His next start was at Cranbourne in a maiden over 1200 metres for three-year-olds and he was successful. He showed natural improvement from his first to second starts and his attitude was very good. He took a sit behind the leaders and when he gained clear running in the straight really accelerated quickly over the last 200 metres. He comes into this race third-up this preparation and with confidence from his last start win. He will start from a middle barrier draw and there looks to be a lot of speed and pressure on paper. I’m really looking forward to riding him again and this race will be a good guide for his path through the Spring.

Race 2 is the BM84 MSC Signs Handicap over 1200 metres. My ride here is JUMBO OZAKI who is trained by Danny O’Brien. This six-year-old gelding by Unencumbered has had 14 starts for a record of four wins and seven minor placings, only missing a top three placing on three occasions. He is a horse that I know well and have ridden and won on previously. He races here some six weeks between runs and is dropping back 200 metres in distance from his last start, but has the blinkers added to his head gear for the first time. He races well over the 1200 metres and has the advantage of a low barrier draw in a race where there looks to be a lot of speed on paper. If the blinkers have the desired outcome he can be right in this at the finish.

Race 3 is the Group 2 Aspect Kitchens Stutt Stakes over 1600 metres for three-year-olds run under set weights. My ride here is SANDY PRINCE who is trained by Ben & JD Hayes. This gelding by Pride of Dubai has had six starts for a record of two wins and four second placings. His two wins and two of his second placings have come this preparation and I’ve ridden him in his four runs this campaign. At his most recent run over 1500 metres he was very game in defeat when beaten by just under a length after being pressured a long way out and running the first half of the race a lot quicker than the second half. He is a horse with a good constitution for racing and handled racing around Moonee Valley well last start. He can get keen in running and has a slight gear change with his noseband this evening. He will start from a low barrier draw and as a horse that races on-speed will take a lot of running down in this.

Race 4 is the Group 3 Piper-Heidsieck Scarborough Stakes over 1200 metres for three-year-old fillies run under set weights. My ride here is LARKSPUR RUN who is trained by James Cummings. This daughter of Shamardal has had six starts for a record of two wins and three second placings. I had my first ride on her last start at this course and distance where, after starting from a wide barrier draw, came from second last to finish off strongly into second placing in Listed company behind the promising Zouzarella. She felt to me like she would take a lot of benefit from her first run at Moonee Valley and since then she has also galloped at the course and she felt like she had improved. She is a horse that is superior on rain affected ground, but I also feel that she will be well suited by the track conditions this evening. She will start from a favourable barrier draw and if she runs up to her last performance and overall form, she is the horse they all have to beat in this very competitive Scarborough Stakes.

Race 6 is the Group 3 Steamatic JRA Cup over 2040 metres. My ride here is SECRET BLAZE who is trained by Tony & Calvin McEvoy. This six-year-old gelding by Sizzling has had 29 starts for a record of six wins and eight placings. His winning distance range is from 1400 to 2500 metres and he’s had four runs over this distance for a win and second placing. He had a long time off before starting this preparation and his three runs this time in have been in Group 3 and handicap company over 1200 (twice) and 1400 metres respectively. He is stepping up to his more preferred distance range and will be fitter for his recent racing. He drops to the minimum weight of 54 kilos in this race and is shaping up like he is returning to his best form.

Race 7 is the Group 1 Charter Keck Cramer Moir Stakes over 1000 metres run under weight for age conditions. My ride here is TREKKING who is trained by James Cummings and raced by Godolphin. This seven-year-old gelding by Street Cry has had 37 starts for a record of 10 wins and 11 placings and has amassed an amazing win-place record. He is a Group 1 winner and has been competitive at the highest level for a number of years. He’s competed in this race for the past two years, last year he finished second and the year before he was unplaced but only a length-and-a-half from the winner. He races here second-up this preparation and will start from a low barrier draw. He is a horse that likes racing on good ground so the track surface will be to his advantage. On his overall form and consistent record at the track, he will be very strong to the line in this feature race and hopefully go one better than last year.

Race 8 is the Group 2 Ladbrokes Stocks Stakes over 1600 metres for mares run under weight for age conditions. My ride here is ONLY WORDS (NZ) who is trained by Chris Waller. This four-year-old mare by Sweynesse is raced by Star Thoroughbreds and partners. I was successful on her last season in QLD in the Group 2 The Roses over 2000 metres. I then rode her in the Group 1 QLD Oaks where we finished just over four lengths from the winner. She had a break from training after her QLD campaign and resumed last start at Flemington in the Group 2 Let’s Elope Stakes where she carried 58 kilos and her performance showed that she has returned in good order and this will be a perfect second-up run for her. She will start from a low barrier draw and hopefully I can make full use of that. She can be awkward with her head carriage but it looks like she has matured into her four-year-old year. If she races kindly for me she will take a lot of beating in this weight for age contest.