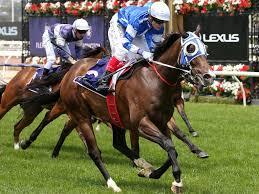 This evening I’m riding at Moonee Valley where it’s the first night meeting of the new season, featuring the Group 1 Moir Stakes. The rail is in the true position and the track is rated in the good range, but there is rain and poor weather forecast throughout the day, so it will be interesting to see if and how that alters the track conditions.

Race 1 is the Lloyd Williams Plate over 1200 metres for three-year-old colts and geldings, my ride here is EXTRA TIME who is trained by Leon Macdonald & Andrew Gluyas. This gelding by Shooting To Win has had seven starts for a record of one win and two second placings, with his win being in a Group 3 race at Morphettville at the end of his two-year-old season.He resumed this preparation against the older horses in the Group 3 Spring Stakes at Morphettville. He wore blinkers in the Spring Stakes and after being slow out of the barriers and over-racing badly put in a solid effort to finish 6.4 lengths from the winner. That race is proving to be a strong form reference with the winner, Behemoth, remaining unbeaten this preparation and is now a dual Group 1 winner at Caulfield. Extra Time had the blinkers removed for his next start which was at Caulfield where he was narrowly defeated by less than half a length in the Group 3 McNeil Stakes for three-year-old’s. I rode him for the first time in his most recent start at Flemington over the straight course in the Group 2 Danehill Stakes, he was beaten by just over three lengths and felt a little bit lost racing over the straight course for the first time. He will start from a low barrier draw and is well treated under the set weight and penalty conditions of this race. I’m looking forward to riding him again and he will take a lot of beating in this on his best form.

Race 2 is the BM84 MSC Signs Lockdown Legends Handicap over 1200 metres, my ride here is SIMPLY OPTIMISTIC who is trained by Trent Busuttin & Natalie Young. This six-year-old gelding by Encosta de Lago is raced by the Hawtin family. He races here third-up this preparation and has won four of his five races over this distance. He comes into this race full of confidence as a last start winner when I rode him at Geelong in BM78 grade over this distance. He has drawn an outside barrier this evening and we will need luck in running. If we have luck and if he runs up to his consistent form, he can win this.

Race 4 is the Group 2 E.J. Whitten Time to Test Stutt Stakes over 1600 metres for three-year-old’s, my ride here is CROWN MINT who is trained by Gordon Richards. This gelding by Hallowed Crown has had six starts for one win and four placings, only missing a top three placing once in his career which was last start when I had my first ride on him in the Listed Exford Plate at Flemington over 1400 metres. We had no luck in running and followed the favourite into the race, who was disappointing. I was so pleased with my horse when he did get room how strongly he finished off and the acceleration he displayed to finish fourth and less than three lengths from the winner. The step up in distance should be to his advantage and he comes into this race with a gear change of blinkers off and winkers on. He has stepped slowly from the barriers with the blinkers on, so if the gear change can help him to jump on terms he shouldn’t be far off the leaders and settle in a nice position. If he handles the tight turning circuit of this course, that will help to keep his options open going forward to possibly the Vase, and potentially the VRC Derby. I’m looking forward to riding him again and seeing how he measures up to this grade and I’m confident he can be one of the main chances.

Race 6 is the Group 3 Ladbrokes JRA Cup over 2040 metres, my ride here is MANTASTIC (IRE) who is trained by Chris Waller. This imported seven-year-old gelding by Fastnet Rock is raced by OTI Racing and partners. He has been a consistent galloper throughout his career with a record of five wins and seven placings from 21 starts. He has been building up nicely though this preparation and races here fourth up this campaign and is stepping up in distance from 1700 metres last start. He drops to the minimum weight of 55 kilos and will start from a middle barrier. He is a horse that usually settles in the second half of the field in running, so providing the track is racing fairly and allowing horses to make ground, and the race is run to suit him, I expect he can make his presence felt.

Race 7 is the feature race of the night, the Group 1 Charter Keck Cramer Moir Stakes over 1000 metres, my ride here is BOLD STAR who is trained by Gordon Richards. This five-year-old gelding by Needs Further has had 24 starts for a record of seven wins and six minor placings and is a really consistent race horse. I’ve ridden him with success when he has competed in Victoria previously and have ridden him in both of his runs this campaign at Caulfield and Flemington where we finished fourth and sixth respectively, without being beaten far. I felt he was disappointing last start, and even though his run was excellent, I felt he wasn’t at his best. He is third-up tonight and is dropping back in distance after racing over 1200 metres last start. He will start from a wide barrier and this race looks like it will be run very quickly, which will suit him providing the track is playing fairly. If he runs up to his best form look for him to be finishing off really strongly over the concluding stages.

Race 8 is the Group 2 Four’N Twenty Stocks Stakes over 1600 metres for mares, my ride here is ONE MORE TRY who is trained by Matt Cumani. This six-year-old mare by Dane Shadow is lightly raced for her age having had 19 starts for a record of five wins and six placings. She races here second-up this preparation and has good form second-up with a record of two wins and two second placings from five attempts. She is a versatile mare who races well on all surfaces from good through to heavy, so if the track deteriorates it will be no disadvantage to her. On her rating she is not well treated under the weight for age conditions of this race as she carries the same weight as the highest rated horse, but she is very consistent and competitive and I expect she can continue her good form second-up and run well.