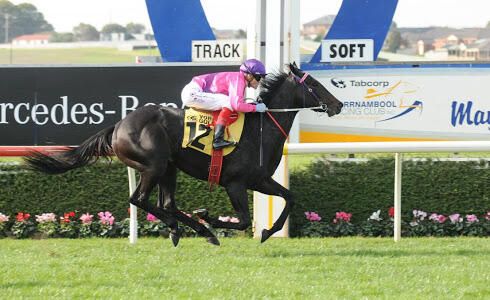 This evening I’m riding at Moonee Valley. The rail is out seven metres and the track is rated in the good range. With the rail out seven metres the field sizes are reduced and it makes for tricky racing where good barrier draws matter and horses that can handle the unique Moonee Valley circuit are advantaged.

Race 6 is the BM64 Ladbrokes 55 Second Challenge Heat 2 over 955 metres, my ride here is DANE CLIPPER who is trained by Tom Dabernig & Ben Hayes. This four-year-old mare by Danerich has had five starts for a win and third placing, with all of her runs being in her first racing preparation last year. She started her career off with a strong win a Pakenham on the synthetic surface where she won by 4.75 lengths. She then competed in a BM64 for three-year-old fillies at Flemington where she finished third and less than two lengths from the winner. Her next three runs were all at this track over 1000 and 1200 metres. I rode her in a recent jumpout in preparation for her first-up run and she was extremely speedy and gave me a good feel. She has drawn a wide barrier in a race where there looks to be a lot of speed on paper. If we have luck from the wide draw and she runs up to her recent jumpout, she will be very hard to beat.

Race 8 is the BM78 BCNA Pink Lady Handicap over 1600 metres, my ride here is TITAN BLINDERS who is trained by Leon & Troy Corstens. This five-year-old gelding by All Too Hard is raced by Ozzie Kheir and Brad Spicer. I had two rides on him at Caulfield at the end of his last preparation where we finished third and second over 1400 metres in this grade of race. He raced close to the speed the first time I rode him and we made all the running next start, to be narrowly defeated. He races here fourth up today and has finished second in his three runs this preparation and has been racing so consistently. He steps up in grade and distance from last start and has placed once from three attempts over this distance range. He has drawn a middle barrier and there looks to be a lot of pressure in this race. If he runs up to his consistent form he will take a lot of beating in this and I’m looking forward to riding him again.

Race 9 is the BM70 Ladbrokes Easy Form Handicap over 1000 metres for mares, my ride here is WRITE ENUFF who is trained by Ken & Kasey Keys. This five-year-old daughter of Written Tycoon has had 14 starts for a record of two wins and six placings. I rode her in her first ever start at Warrnambool where we won the VOBIS Gold Strike, and again when she was a three-year-old, so it’s been just over two years since I’ve ridden her. She raced really consistently last preparation and showed that she had matured nicely, from her four runs in that campaign she produced a win, two seconds and a fifth. She races here first-up this evening, has good form when racing fresh and has placed five times from 11 attempts on tracks rated as good. By this race we will know how the track is playing and if she runs up to her previous first-up form she will be very competitive.