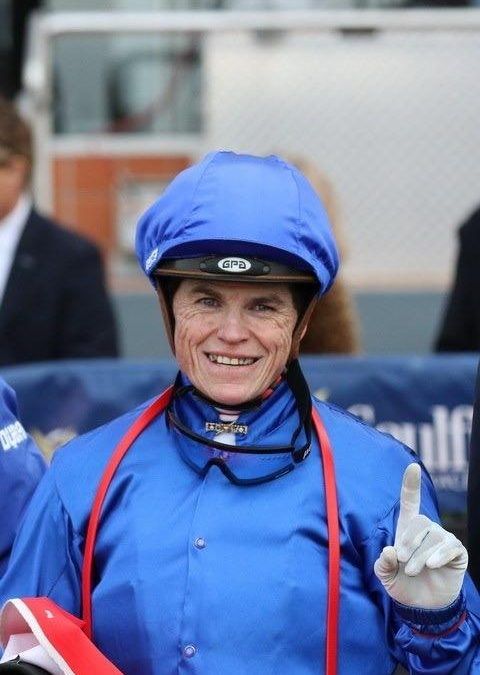 This evening I’m riding at Moonee Valley where it’s the first meeting of the two-day Cox Plate Carnival. The rail is in the true position and the track is rated in the good range.

Race 1 is the Lockdown Legends Handicap over 2040 metres, my ride here is ONE MORE TRY who is trained by Matt Cumani. This six-year-old mare by Dane Shadow has had 21 starts for a consistent record of five wins and seven placings. She races here fourth-up this preparation and is racing over the 2000 metres for the first time this campaign. I’ve ridden her at various times throughout her career and most recently two starts ago at this course in the Group 2 Stocks Stakes over 1600 metres. She was back last in that run and closed the race off strongly to finish third to Mystic Journey. Last start she competed in Group 3 Ladies Day Vase at Caulfield and after starting from a wide barrier closed off well to finish just over a length from the winner. She is competing against a small field this evening and has been allocated the minimum weight of 56 kilos. She is such a consistent mare and will take a lot of beating in this race.

Race 3 is the Antler Luggage Handicap over 1200 metres, my ride here is SIMPLY OPTIMISTIC who is trained by Trent Busuttin & Natalie Young. This six-year-old gelding by Encosta de Lago is raced by Keith and Brandon Hawtin. He is fourth-up this preparation and I’ve ridden him in his three runs this campaign, winning our last two and importantly, his last start win was at this course and distance. He is stepping up in grade from BM84 to open handicap and drops three and two-and-a-half kilos in weight from his past two runs, to the minimum in this event. He comes into this race full of confidence and if the predicted rain arrives it will be of no disadvantage to him. This race looks to set up well for him from the inside barrier draw and he could win again and graduate to open handicap company based on the way that he has been going.

Race 4 is the Chandler Macleod VOBIS Gold Star over 1500 metres, my ride here is KAZIO who is trained by Aaron Purcell. This set weight and penalty race is restricted to VOBIS Gold horses. Kazio is a seven-year-old gelding by Foreplay who has been in Aaron’s care for his three runs this preparation and I’ve ridden him on a number of occasions when he was previously trained by Colin Little. He looks like he has been building nicely throughout his preparation towards this race and the 1500 metres is a perfect distance for him. This is a small but competitive field and I know he will be there in the finish.

Race 5 is the 0 – 84 Ladbrokes 55 Second Challenge Heat 3 over 955 metres, my ride here is QUEEN ANNABEL who is trained by Rebecca Kelly. This seven-year-old mare by Bel Esprit races here second-up this preparation and comes into this after a solid first-up run at the course and distance where she finished just over four lengths from the winner. She has drawn a wide barrier and is a mare that usually gets back in the run. There looks to be a lot of speed and pressure on paper and if the track is allowing horses to close off from back in the field it will only enhance her chances.

Race 6 is the Sweeney Estate Agents Handicap over 1000 metres for three-year-old’s, my ride here is RATTLE AND BANG who is trained by Dean Binaisse. This three-year-old colt by Unencumbered is making his debut tonight. I’ve ridden him in a jumpout and he is a beautiful looking horse that showed nice ability. He will need to do everything right and have luck in running against this strong field in his debut run. I have no doubt that in time he will measure up to this grade.

Race 7 is the BM84 Seppelt Wines Handicap over 1500 metres, my ride here is TITAN BLINDERS who is trained by Leon & Troy Corstens. This five-year-old gelding by All Too Hard is raced by Brad Spicer and Ozzie Kheir. He has been a model of consistency throughout his career with a record of four wins and 12 placings from 22 starts. He is fifth-up this preparation and drops nicely in weight as he is racing up in grade from his recent runs. I feel the 1500 metres is a perfect distance for him as he struggles at 1600 metres, but has won twice from two attempts over this distance. He will start from a favourable barrier and is a horse that makes his own luck in running and will take a lot of running down in this.

Race 8 is the Group 1 Ladbrokes Manikato Stakes over 1200 metres, my ride here is KEMENTARI who is trained by James Cummings. This six-year-old gelding by Lonhro is raced by Godolphin and I will wear the white cap to distinguish me from their other runner, Trekking. Kementari is a Group 1 winner who has been racing consistently at the highest level. He comes into this race second-up and has won and placed twice from six attempts second-up. The blinkers are going back on his head gear and he is a horse that we know has really good ability, and it will be my job to coax it out of him and get his head in front at the right time. There is no doubt on his best form he can win this and it would be a great outcome to see him back in the winners stall.