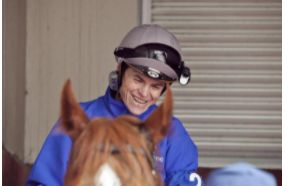 Today I’m riding at Geelong. The rail is out 6 metres and the track is rated in the good range.

Race 3 is the The Elephant and Castle Hotel Three-Years-Old Maiden Plate over 1325 metres. My ride here is LAFARGUE who is trained by Danny O’Brien. This colt by Capitalist is raced by a group of owners that include Michael Christian and Danny’s staff members Matt Harrington and Ben Gleeson, so no doubt there will be extra pressure from the stable! He made his debut as a two-year-old at Flemington in May where he started favourite over 1000 metres, finishing unplaced and just over three lengths from the winner. Since then he has had a break from training and returns to the races today. I rode him in a jumpout at Flemington last month over the straight course with the blinkers on and he gave me a very good feel and was impressive on the day against the older, open handicap sprinters. He wears the blinkers for the first time under race conditions today and if he runs up to that jumpout, he will be winning this.