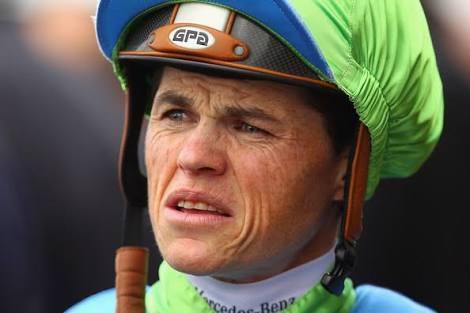 Today I’m riding at Geelong. The rail is in the true position and the track is rated in the good range.

Race 1 is a 3YO Maiden Plate over 1500 metres, my ride here is DUBAI CENTRE who is trained by Danny O’Brien. This gelding by Pride of Dubai is raced by Peter Devitt. He’s had two unplaced starts with both of those being when he was a two-year-old in city grade. He races first up today and this will be his first attempt over the distance. It will be interesting to see how he performs on raceday in his first run as a three-year-old.

Race 2 is the 3YO Fillies Maiden Plate over 1300 metres, my ride here is VILANCULOS who is trained by Danny O’Brien. This daughter of Crowded House is raced by Wyadup Valley Farm. She is making her debut today and although I haven’t ridden her, I have seen two of her jumpouts at Flemington. She will start from a wide barrier in a capacity field of fillies that are mostly unraced. It will be interesting to see what my instructions are and how she handles her first day at the races.

Race 3 is the Maiden Plate over 1200 metres, my ride here is KUZCO LAD who is trained by Gai Waterhouse & Adrian Bott. This four-year-old gelding by Zoustar runs in the colours of Blue Sky Bloodstock. He’s had six starts for a record of two second and two third placings, only missing a top three placing twice, with both of those unplaced runs being last preparation where he wasn’t beaten far. All of his races have been in N.S.W and the A.C.T and this will be his first run in Victoria. I have ridden him in a jumpout at Flemington in preparation for his second-up run and felt that he is a horse with an extravagant action that gave me a nice feel, and on that jumpout he has the ability to win today. If we have luck in running from the wide barrier draw and he reproduces his jumpout effort he will take a lot of beating.

Race 5 is a BM64 Handicap over 1400 metres, my ride here is SHAMAL LASS who is trained by Symon Wilde. This five-year-old mare by Artie Schiller has had 11 starts for a record of two wins and three placings, she is also a course and distance winner, and has a good record over this distance range. She will start from a wide barrier draw and is a horse that usually settles midfield or worse. She races here second up this preparation and is returning to racing on a firmer surface after closing off really well last start on a heavy ground at Warrnambool. She hasn’t missed a top thee placing when racing second up from two attempts and looks well placed to be very competitive here.

Race 8 is the BM78 Handicap over 1200 metres, my ride here is SIMPLY OPTIMISTIC who is trained by Trent Busuttin & Natalie Young. This six-year-old gelding by Encosta de Lago is raced by the Hawtin family. I had my first ride on him last start at Sandown when he resumed on heavy ground and he raced extremely well on a track that had deteriorated by the end of the day. He finished fifth and 4.6 lengths from the winner with all of the horses beating him home having race fitness on their side. He comes into this with a nice gap between runs and will have taken fitness benefit from his first up effort. He meets the winner of his first up effort, Proper Rogue, again today and they will carry level weights in this event and we have drawn a lot more favourably. I’m looking forward to riding him again and he will take a lot of beating in this.