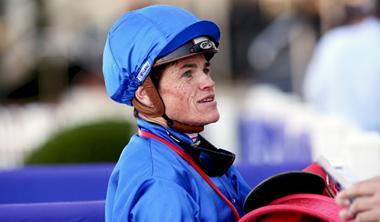 Today I’m riding at Geelong. The rail is in the true position and the track is rated in the soft range. I will also be galloping Vow and Declare in between races today which I’m looking forward to in preparation for his Spring carnival program.

Race 1 is the bet365 Odds Drift Protector Maiden Plate over 1400 metres. My ride here is GOT AN INSPIRATION (NZ) who is trained by Danny O’Brien. This three-year-old colt by Vadamos is raced by Nick Moraitis. He is having his first start today and this will be my first time riding him. I’ve seen a replay of his Flemington jumpout where he wasn’t asked to do much by his rider but looked like he had plenty to offer and went nicely. He will start from a favourable low barrier draw and if we are able to utilise that it will be to his advantage. I’m really looking forward to seeing how he competes under raceday pressure and conditions for the first time.

Race 3 is the Connect Tel 3YO Colts and Geldings Maiden Plate over 1200 metres. My ride here is FIRST PLATOON who is trained by Danny O’Brien. This colt by Sebring is raced by Rupert Legh and partners. I’ve ridden him on two occasions, once when he was a two-year-old at the Cranbourne official trials where he wore blinkers and gave me a really nice feel when winning his heat. He was then sent for a break from training and has returned this preparation with two jumpouts under his belt to be race ready. I have ridden him in a recent jumpout where he didn’t have the blinkers on and felt that he lacked a bit of focus without blinkers and did a few things wrong. He wears the blinkers for his first day at the races and will start from a middle barrier draw. This looks to be a very strong field but I like the feel my horse gave me in his official trial at Cranbourne and if he brings that to the races he will be very competitive in this.

Race 4 is the JT Dixon Three-Years-Old Fillies Maiden Plate over 1200 metres. My ride here is COPPER CHARM who is trained by Danny O’Brien. This daughter of Street Boss is raced by Murray Thoroughbreds. She made her debut at Moe in July on heavy ground where she looked to have nice speed, but was at her top speed over the 1100 metres, so the step up in distance and firmer surface should suit her. She will start from a wide barrier draw today but comes into this with the benefit of race experience. We will need a lot of luck in running from the wide barrier draw today.

Race 5 is the Jack Rabbit 4YO+ Maiden Plate over 1200 metres. My ride here is VERSILIA who is trained by Danny O’Brien. This four-year-old mare by Snitzel is raced by Jo Lindsay of Cambridge Stud in New Zealand. She is having her second start today after making her debut at Moe last month on heavy ground. She started from a wide barrier at Moe and put in a really solid effort to finish fifth and only 1.65 lengths from the winner. Unfortunately she has again drawn a very wide barrier draw and we will need luck in running. I liked the way she ran on debut and having taken natural improvement from that run and with luck in running, she should be one of the main chances.

Race 7 is the Oz Equipment Rentals Class 1 Handicap over 1300 metres. My ride here is THE GARDEN who is trained by Symon Wilde. This four-year-old gelding by Shooting to Win is raced by Grand Syndicates. He is a lightly raced gelding with a good record of three starts for a win and two third placings. He’s had two runs this preparation, winning his maiden first-up at this course over 1250 metres in what is proving to be a very strong form reference with the second and third horses both subsequent winners. The Garden then stepped up from maiden grade to a 3YO C&G handicap at Caulfield eight days later where I had my first ride on him. We started from an outside barrier and raced wide and on-speed throughout, he put in a really solid performance to finish third and just under two lengths from the winner. I’m really looking forward to riding him again and he looks very well placed here in Class 1 company. I know he is destined to progress through his grades quickly given the feel he has given me and if he holds his form from last start he is the horse they all have to beat.

Race 8 is the Prestige Jayco BM64 Handicap over 1100 metres. My ride here is ZACOUVER (NZ) who is trained by Leon & Troy Corstens. This four-year-old mare by Vancouver has had six starts for a win and second placing. I rode her when she won her maiden in a 2YO Fillies handicap at Sandown on heavy ground. She was then sent for a break from training and when she resumed as a three-year-old was well beaten down the straight course at Flemington. She then had the blinkers added to her head gear and I was re-united with her at Sale where she raced over 1200 metres, she showed good speed before getting tired late. At her next start she contested a 3YO BM64 at Moonee Valley and was interfered with and lost her rider in running. She hasn’t raced since February of this year after the Moonee Valley incident. She’s had two jumpouts in preparation for her return to the races where she looked to go nicely in both. She will start from a wide barrier draw today and we will need luck in running. If she can re-capture her two-year-old form she will be among the main contenders in this.