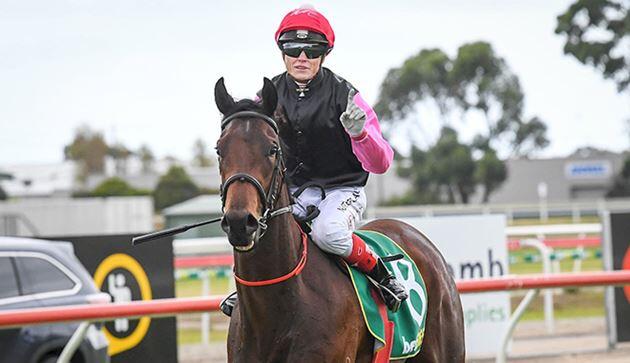 Craig Williams suggested all-the-way two-year-old debut winner Forever And A Day is destined for more success in races over further after winning her 1200-metre maiden at Geelong on Tuesday.

The Danny O’Brien-trained Forever And A Day ($7.50) ambled to the lead from barrier four of nine in bleak conditions, with Williams controlling affairs from the front, ambling through the early stages before increasing the tempo approaching the home turn.

Forever And A Day defeated Godolphin’s Heresy ($7.50), who closed nicely from his rearward settling position, by a short neck, with Ostracised ($3.40 favourite) a further 1.25 lengths away in third.

“I like this filly, I spoke to Danny (O’Brien) this morning, he said she had come on from her barrier trial,” Williams said, referring to her third in an 800-metre Cranbourne trial on April 6.

“I was extremely confident on her, knowing her preparation and the feeling of ability she has given me.

“I was really happy to make a race of it from the 400 metres, she was strong and solid late.

“I feel that she is a really nice filly with a future over distances that are longer.”

Forever And A Day is a daughter of No Nay Never, sire of last month’s Patrick Payne-trained Ballarat maiden winner Douceur, and appears to derive his staying potential from his dam’s side of the pedigree.

The younger half-sister to four-time winner Conchita is out of unraced Zafonic mare Notable, an unraced mare who produced Red Cardinal, a Melbourne Cup starter for Australian Bloodstock who won four black-type races between 1900 and 3218 metres during his career.

No Nay Never, a Group 1-winning two-year-old who was Scat Daddy’s first son to stud, shuttled for four seasons between Coolmore Stud in Ireland and Australia, from 2016 to 2019, and is yet to sire a horse that has achieved black type in Australia.

No Nay Never has experienced considerably more success as a stallion in the Northern Hemisphere, with Ten Sovereigns, Arizona, Wichita and Alcohol Free among his most notable progeny.