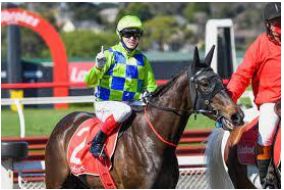 Today I’m riding at Flemington. The rail is out 14 metres and the track is rated in the soft range.

Race 2 is the Darley Spring Preview over 900 metres for two-year-olds. This is the first race for two-year-olds in the new season. My ride here is NOMINATOR who is trained by Gai Waterhouse & Adrian Bott. I’ve ridden this colt by Zoustar in a recent jumpout in preparation for his debut. He was very professional and well educated in his jumpout where he showed good speed and ability. If he brings his jumpout form to the races he will take a lot of beating.

Race 3 is the BM64 Myer Fashions on your Front Lawn over 1420 metres for three-year-olds. My ride here is CUBAN LINK who is trained by Greg Eurell. This filly by Testa Rossa has had two starts and I’ve ridden her on both occasions. She made her debut on the synthetic track at Pakenham over 1200 metres where she was narrowly beaten to finish second after making all the running. She then stepped up to 1400 metres at her next start at Cranbourne and was ridden just off the speed from a low barrier draw and won the race by just under a length. I expect she will have taken further race experience and confidence from her last start win. She is stepping up from maiden to 3YO BM64 grade today and has the benefit of an inside barrier draw to afford her every opportunity in running. If she has improved again from last start, she can win this.

Race 4 is the BM70 Resimax Trophy over 1100 metres. My ride here is TERAMIA who is trained by Matt Laurie. This five-year-old mare by Deep Field is lightly raced having had nine starts for a record of two wins and four placings. One of her second placings came last start over the same course, distance and grade as this race when I had my first ride on her. She started from a low barrier draw last start and was held-up for clear running for the majority of the race, once she gained clear running she really closed off well into second placing and only half a length from the winner. She comes into this with a nice gap between her races and with a recent official trial at Cranbourne to keep her fitness levels up to the mark. She is a mare that usually gets back in her races and needs luck in running but if she runs up to her last effort at this course and distance she can win this.

Race 5 is the Kennedy Oaks Preview over 1800 metres for three-year-old fillies. My ride here is BARB RAIDER who is trained by Jerome Hunter. This daughter of Rebel Raider is raced by the Gathercole family. She’s had three starts for a win and two placings and I’ve ridden her on all three occasions. She made her debut at Sandown on the Lakeside circuit over 1200 metres where, after being detached from the field in the early stages ran on strongly to finish third. She then stepped up to 1400 metres at Sandown on the Hillside track where she showed natural improvement to finish second and only half a length from the winner. Last start she raced over 1600 metres on good ground on the Hillside course in a 3YOF BM70 and was dominant in her winning effort when she raced on-speed. She is a filly her trainer has always had a good opinion of and has been targeted towards the Oaks and she has continued to please. She will start from an outside barrier draw today and with luck in running she will take a lot of beating in this.

Race 6 is the Penfolds Victoria Derby Preview over 1800 metres for three-year-old colts and geldings. My ride here is GUNDEC who is trained by Symon Wilde. This colt by Kermadec had two starts as a two-year-old for his previous trainer in NSW before being purchased by his current ownership group. I rode him when he had his first run for his new connections in a maiden over 1500 metres at Geelong earlier this month where we finished second. He went forward and made all the running at Geelong and was only narrowly beaten by the winner. I felt that he would take natural fitness improvement from his first-up run and would also benefit from his first run the Melbourne way of going. I’m really looking forward to seeing him pre-race and the improvement he has taken from his first-up run. This would be a lovely race for him to win his maiden and continue on the Derby path and if he runs up to his last start he will be one of the main chances.

Race 7 is the BM78 Hanan Displays Mile over 1630 metres. My ride here is MR BRIGHTSIDE (NZ) who is trained by Ben & JD Hayes. This four-year-old gelding by Bullbars has had six starts for a record of four wins and a second placing. He started his career racing in New Zealand before being purchased and transferring to Lindsay Park. From his five runs in Australia he has recorded a second placing followed by four consecutive wins, and I’ve ridden him at each of his wins. He has been very well placed by the team and finds himself racing in the same grade and over the same distance as last start at Moonee Valley, but he does carry 2.5 kilos more in weight. He’s always felt like a spacious track like Flemington would suit him and we get that today. If he runs up to his progressive and consistent form he is the horse they all have to beat.