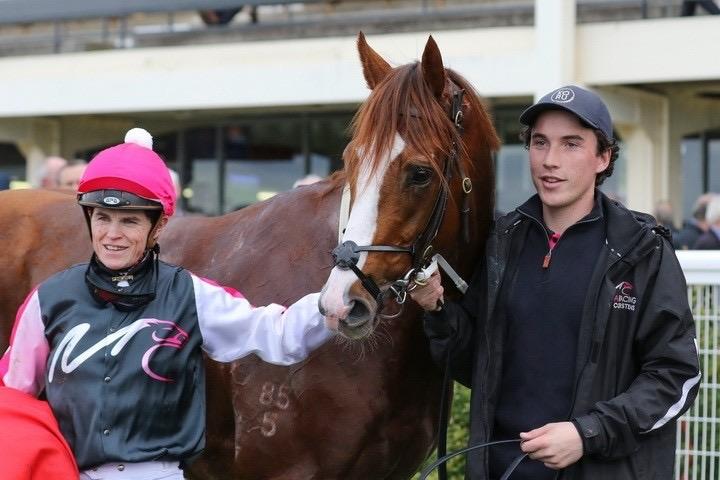 I’d like to wish all of my supporters a Happy New Year and a safe and successful 2021. Today I’m riding at Flemington, the rail is out 3 metres and the track is rated in the good range. There is rain forecast for later in the day, so the changing weather conditions are something I’ll have to be mindful of throughout the meeting.

Race 1 is the New Year Sprint over 1000 metres for two-year-old fillies, my ride here is I AM ENCHANTING who is trained by Danny O’Brien. This daughter of I Am Invincible makes her debut today, as are most of her opposition in this field. I’ve watched a replay of her recent jumpout at Flemington where she was slow out of the barriers but finished off nicely. She looked to jumpout and move nicely and if she brings that form to the races and handles the raceday pressure and conditions for the first time, can make her presence felt.

Race 2 is the BM70 Welcome 2021 Handicap over 2000 metres, my ride here is NOT MINE (GER) who is trained by Tom Dabernig & Ben Hayes. This six-year-old gelding by Dabirsim has had 23 starts for a record of one win and two second placings and started his career racing in Europe, before moving to Hong Kong and now Australia, where he’s had his past four starts. He is a horse that doesn’t appreciate rain affected ground, so hopefully the rain doesn’t arrive prior to his race. I’ve ridden him in his past three starts and have been pleased with his progression. His effort last start at Pakenham was very good to finish just over a length from the winner over 1600 metres. He steps up to the 2000 metres today with his only win being over 1900 metres, he will appreciate the step up in distance. He looks well placed today and on his best form can win this.

Race 3 is the Listed Bagot Handicap over 2800 metres, my ride here is TRALEE ROSE (NZ) who is trained by Symon Wilde. This talented four-year-old mare by Tavistock is lightly raced for her age with a race record of three wins and three second placings from eight starts. She has been in great form this preparation, winning her first three runs this campaign before finishing second at her most recent start over 2500 metres at Flemington. She is stepping up to this distance for the first time and drops to the minimum weight of 54 kilos. She is a versatile mare that handles all track conditions, so if there is rain about it will be of no disadvantage to her. On her current form she is the horse they all have to beat.

Race 4 is the Group 3 Standish Handicap over 1200 metres, my ride here is MORRISSY who is trained by Leon & Troy Corstens. This five-year-old entire by Snitzel is raced by the Morrissy family. He is such a consistent galloper and comes into this feature race with a record of five wins, five second and six third placings from 25 starts. I rode him in a recent jumpout in preparation for this race and his future goal of racing at the Magic Millions race day on the Gold Coast on January 16th. This is a competitive sprint race but he has the experience of racing over the straight course and based on the way he is going, I expect he will make his presence felt.

Race 6 is the BM70 Victorian Jockeys Association Trophy over 1400 metres for fillies and mares, my ride here is MAGGIE MISS who is trained by Gai Waterhouse & Adrian Bott. This five-year-old mare by Medaglia d’Oro is lightly raced having had 14 starts for a record of two wins and seven placings. She races here third-up today and last start was her first time racing the Melbourne way of going for quite some time, and that was my first ride on her. She pulled up with an issue post-race which explains her disappointing performance. Away from last start she has been a very consistent mare and hopefully she can bounce back to her best form again today.

Race 7 is the BM70 Off The Track Program Handicap over 1700 metres for three and four year-old’s, my ride here is PLUCKY PIROUETTE who is trained by Caroline Jennings. This three-year-old filly by Brazen Beau is raced by Kennedy Racing. She’s had nine starts for a record of one win and three placings. Two starts ago at Pakenham she had the blinkers on for the first time and was solid in winning her maiden over 1600 metres. At her most recent start she stepped up to 3YO Fillies BM64 grade at Caulfield to finish third. After watching a replay of her Caulfield run I feel she is better suited to flatter and more spacious tracks, and the Flemington circumference will be of benefit to her. She drops 4 kilos in weight from last start and a low barrier draw will give her every opportunity to be competitive against this strong field.

Race 8 is the BM70 Australian Trainers Association Plate over 1600 metres, my ride here is FUNDRAISER who is trained by Tom Dabernig & Ben Hayes. This four-year-old gelding by Helmet is raced by Halo Racing Services and partners. He is lightly raced for his age having had seven starts for a record of three wins and two placings. He’s had three runs this campaign and after finishing third first-up to The Astrologist over 1100 metres, has won his next his two runs over 1200 and 1400 metres respectively. This is his first attempt racing over the mile and he can be an aggressive horse in running, so keeping him relaxed will be a key factor. He comes into this with confidence from his past two wins and he’s been in great form this campaign. With luck in running from the barrier, and provided he can relax through the early stages, he will take a lot of beating in this.