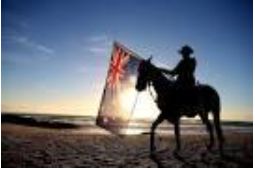 Today I’m riding at Flemington for the traditional Anzac Day meeting. It’s such a special day where we can remember, recognise and thank our past, present and future service men and women. The rail is in the true position and the track is rated in the soft range.

Race 2 is the BM84 Auckland Racing Club Trophy over 1600 metres for fillies and mares. My ride here is CARRIE (JPN) who is trained by Danny O’Brien. This five-year-old daughter of Manhattan Café is raced by Robert Anderson. She’s had 12 starts for a record of three wins and three minor placings. I had my first ride on her last start when she raced first-up at Ballarat over this distance where she finished third on soft ground. She handled the day really well with the stable reporting that she can be a nervous mare that wants to get on with things, so her demeanour on the day was an improvement. She will start from a low barrier draw today and she can step slowly at times, so I will be mindful of that and hopefully get her out of the gates cleanly so we can utilise the favourable draw. If she brings that same good attitude to the races again today and runs up to her best form she will be one of the main chances.

Race 4 is the Listed ANZAC Day Stakes over 1400 metres for two-year-olds. My ride here is BISCAYNE BAY who is trained by Tom Dabernig & Ben Hayes. This filly by Sebring is raced by Sun Bloodstock. She is a lightly raced filly with a record of two starts for one win. She made her debut in South Australia in the Magic Millions 2YO Classic over 1200 metres where she was ridden back in the field from an outside barrier and finished off well into fifth placing, eight lengths from the winner. A month later she raced at Sandown in a 2YO Fillies handicap over 1300 metres where again she was back in the field but displayed really good acceleration when asked for an effort in the straight and won convincingly. She will start from a wide barrier today and the soft track conditions will be in her favour. If we have luck in running and she has trained-on from last start she can make her presence felt.

Race 5 is the RAAF Centenary over 1400 metres for three-year-olds. My ride here is CELESTIAL SOL who is trained by Chris Waller. This colt by Fighting Sun has had 10 starts for a record of two wins and two placings. I did a lot of work with him when he was a younger horse and have ridden him on raceday throughout his last preparation which concluded with him competing in Listed and Group 3 company before going for a spell. I rode him again first-up this preparation and was successful in a Class 1 race over 1300 metres at Sandown. Second-up he was disappointing and finished last at Caulfield. He can be a quirky horse to ride and hang out in running and want to do a few things wrong, but he does have really good ability on his day. If he returns to his best form and the race works out for him, he has the ability to be very competitive in this.

Race 6 is the Listed VRC St Leger over 2800 metres for three-year-olds. My ride here is ZAKSPEED who is trained by Wendy Roche. This gelding by Spirit of Boom has had 10 starts for a record of one win and a third placing, with his only win coming in Class 1 company at Newcastle over 2330 metres. His past two starts have been against the top three-year-old staying horses with him running credibly in the Group 2 Tulloch Stakes and Group 1 ATC Derby. He looks like a horse that will be able to run out the 2800 metres today, but as no horse in this field has raced over the extended distance it’s always an unknown factor. Looking at his overall form he can be one of the main chances in this.

Race 8 is the Flt Lt Peter Armytage Handicap over 1700 metres for three-year-olds. My ride here is LITERATI who is trained by Symon Wilde. This gelding by Artie Schiller has had five starts for a record of one win and a second placing, with both of those coming in this preparation. He was solid when winning his maiden first-up over 1400 metres at Hamilton, before stepping up to 3YO handicap company at Caulfield over 1600 metres where he was beaten by just over 6 lengths. At his most recent start he finished second at Bendigo over the mile in BM64 grade against the older horses carrying 58.5 kilos. He steps up slightly in distance today, drops 4.5 kilos in weight from last start and returns to racing against his own age group. He has drawn to gain an economical run in transit from a favourable barrier draw and he will take a lot of beating on his best form.