Today I’m riding at Flemington for Oaks Day, the third day of the carnival. The rail is out 5 metres and after recent rain the track is rated in the soft range. 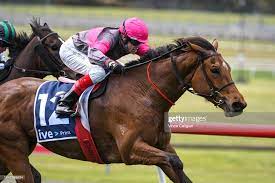 Race 1 is the BM70 TCL TV Stakes over 1700 metres for fillies and mares. My ride here is BIG ANGEL who is trained by Chris Waller. This four-year-old daughter of Zoustar is raced by Kevin Payne. She’s been a model of consistency in her career with a record of one win and six placings from 11 starts. With her rating of 61 she comes into this race carrying the light weight of 55.5 kilos. She is unplaced in two attempts on heavy ground but has placed twice in soft conditions. She drops back in distance from her last start which was over 1800 metres, so she will be very fit for her fourth run this campaign. She will start from a wide barrier but she is a mare that always seems to run her best on the outside of horses, so that won’t be a disadvantage to her.

Race 2 is the Inglis Bracelet over 1600 metres for fillies and mares. My ride here is SIRILEO MISS who is trained by Symon Wilde. This is a race that is restricted to horses that were purchased through and paid up for the Inglis Race Series scheme. SIRILEO MISS is a four-year-old mare by Pride Of Dubai. She is a talented mare with an amazing record of five wins and three placings from nine starts, only missing a top three placing once when she contested the Group 1 Australian Oaks in Adelaide last season finishing fifth on that occasion. She is such a fierce competitor who has really good ability. She’s had three runs this preparation and remains undefeated after winning at Group 3 level last start. Due to the set weight and penalty conditions of this race she does carry a weight penalty, but she is only 2.5 kilos off the minimum and on her 95 rating she is very well placed in this race. She has winning form on soft ground and the stable are confident she will excel in heavy ground also should the track deteriorate. This is a small field of gallopers and she is a mare that makes her own luck by racing close to the speed. On her form she is the horse they all have to beat and I’m looking forward to riding her again.

Race 3 is the Group 3 Darley Ottawa Stakes over 1000 metres for two-year-old fillies. My ride here is SEE YOU IN HEAVEN who is trained by Richard & Chantelle Jolly. This daughter of Divine Prophet is having her first start today, as are most of the field. She’s been well educated with jumpouts and an official trial in Adelaide in preparation for her debut run and the fact that the stable has decided to send her to Melbourne means that they think highly of her. She showed good improvement from her first to second pieces of work which is always a good sign. This is a very competitive field but I expect she can make her presence felt and be one of the main chances.

Race 4 is the BM90 Twitter Trophy over 1800 metres. My ride here is MYSTERY SHOT who is trained by Lindsey Smith. This five-year-old gelding by Shooting to Win has had 12 starts for a record of six wins and two placings. When he started his career as a three-year-old his first five starts were all wins before a long lay-off. His next preparation saw him contest four races for a win and second placing before being spelled again. He’s had three runs this campaign and is dropping back in grade today to benchmark company after running at Listed level for his past two starts. This form around him from his past two starts is very strong which will hold him in good stead for this contest. He has never been exposed to heavy ground but has won three races on soft ground. He will start from a favourable barrier and will be given every chance to return to the winners circle if he runs up to his recent form.

Race 5 is the Listed Off the Track Desirable Stakes over 1400 metres for three-year-old fillies. My ride here is RIDUNA who is trained by Gai Waterhouse & Adrian Bott. This daughter of Fastnet Rock has had five starts for a record of one win and two third placings. She’s done all of her racing in New South Wales, so this will be her first time racing the Melbourne way of going. She’s had three starts this preparation and is racing in good form with her win and a third placing coming this preparation. Last start she finished fourth in a Listed race over 1400 metres, so she stays in the same grade and racing over the same distance as last start. She is a horse that races on-speed and has drawn a wide barrier today, as seems to be a regular occurrence for her! She has winning form on soft ground and has been placed in heavy conditions. If we have luck in running she can make her presence felt.

Race 9 is the Group 3 Listed Network 10 Red Roses Stakes over 1100 metres for three-year-old fillies. My ride here is XTRA GEAR who is trained by Richard Laming. This daughter of Xtravagant is raced by Newhaven Park Stud and partners. She’s had three starts for a win and second placing, only missing a placing last start when she contested a Group 2 race at Caulfield where she stepped up to 1400 metres for the first time. She drops back in distance today to her previous winning range which should be to her advantage. The form around her is very strong and she finished second on debut to Invincible Caviar. She is untested on heavy ground but won her maiden in soft conditions and has jumped out recently at Cranbourne on rain affected ground. I rode her in that jumpout and was impressed with her performance, she did want to go left handed at times and this will be her first time racing over the straight course track. If she runs up to her recent jumpout I expect she will be one of the main chances if she handles the straight course.