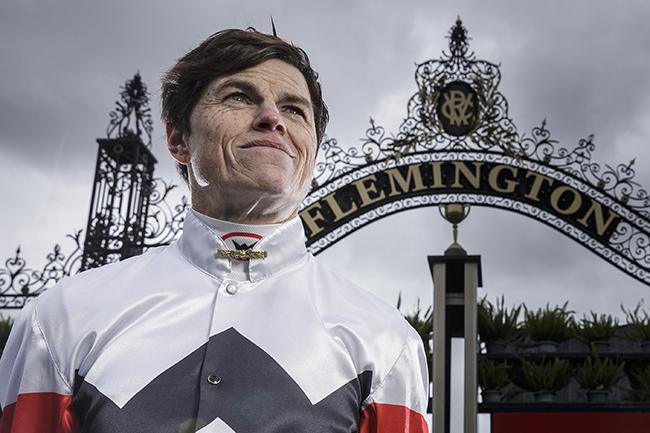 Today I’m riding at Flemington. The rail is out 4 metres and the track is rated in the good range with rain predicted throughout the afternoon.

Race 4 is the Kennedy Oaks Trial over 1800 metres for three-year-old fillies, my ride here is BREEZE ’N’ LUNA (NZ) who is trained by Danny O’Brien. This daughter of Mongolian Khan made her debut at Mornington over 1500 metres where she finished fifth and less than two lengths from the winner. She jumped from a low barrier at Mornington and showed nice natural speed, which will be different from today where she will start from a wide barrier. It will be interesting to see what my instructions are pre-race and how the track will race. If we have luck in running and she has taken natural improvement from her debut run she can make her presence felt. This will be a good opportunity to assess her leading into the Spring and the path she may take towards possible feature races.

Race 6 is the AAMI Victoria Derby Trial over 1800 metres for three-year-old colts and geldings, my ride here is DUBAI CENTRE who is trained by Danny O’Brien. This gelding by Pride of Dubai is raced by Peter Devitt. He had two starts as a two-year-old where he was well beaten in both on soft and heavy ground before being sent for a spell. I had my first ride on him when he resumed at Geelong over 1500 metres, he started from a wide barrier and was a little bit fresh and keen in running and settled outside of the leader. His effort was pleasing in the circumstances and he stayed on nicely to finish second and just over a length from the winner, with the winner looking to be a promising horse. Hopefully with the benefit of a first-up run under his belt Dubai Centre will be a lot more settled today and he will also have taken a good amount of fitness benefit from that run as he steps up in distance, and he can measure up to this grade. His performance today will dictate the path he takes for the rest of his Spring campaign.

Race 7 is the BM78 Henley Homes APC Handicap over 1600 metres, my ride here is SUKOOT (NZ) who is trained by Danny O’Brien. This six-year-old gelding by Savabeel is raced by Uluru Stud. He’s been a very consistent galloper throughout his career and has a record of four wins and nine placings from 22 starts. He is deep into his racing preparation and comes into this with good confidence levels as he is a last start winner over the same distance. He has good form on soft and heavy ground, so if the predicted rain arrives that will be of no disadvantage to him. He will start from a wide barrier today and by this race we will have a good understanding of how the track is playing. He looks well placed today and if we have luck in running he will be one of the main chances.