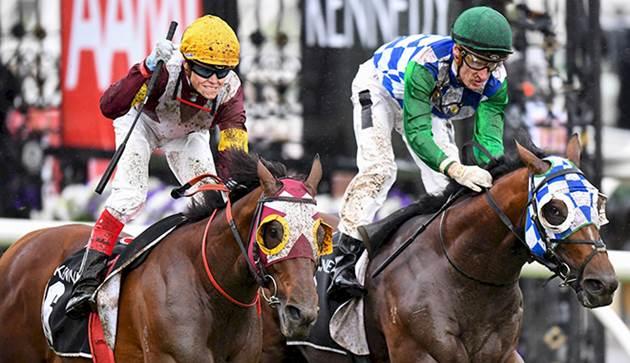 First prize for the Cantala is $1.2 million but Fierce Impact’s connections get a further $500,000 bonus for competing in the Toorak.

“It’s been a bit of a long journey with him,” delighted trainer Matthew Smith said. “It’s taken a while to get him to where he is today and now we are getting the rewards.

“They are so hard to win the races down here and we don’t have runners down here very often so it’s great to come down a get such good results.”

Smith’s confidence shrunk as the day went on and the rain continued to fall as he was unsure whether it would affect his performance.

“I was concerned (about the rain) but it was a beautiful ride from Craig,” he said.

“We’ll have a big party. It might take a week to get home from this one.”

He said of Fierce Impact: “I just thought he was awesome. Matthew Smith and all his staff have done an amazing job with this horse.”

Fierce Impact started as the third favourite in the race at $8 behind co-favourites Night’s Watch (sixth) and Star Of The Seas (ninth) to continue the poor run of favourites in the mile race.