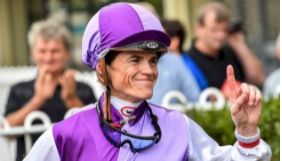 Today I’m riding at Cranbourne. The rail is in the true position and the track is rated in the soft range.

Race 3 is the Frankston Mazda 3YO Fillies Maiden Plate over 1400 metres. My ride here is CALIPER who is trained by Ken & Kasey Keys. This daughter of Star Witness has had three starts for a third placing and I’ve ridden her in all of her races. She made her debut as a two-year-old in the Group 2 Blue Diamond Prelude for Fillies before being sent for a break from training. She returned as a three-year-old with a solid effort at Moonee Valley over 1200 metres behind Zouzarella, where she closed off strongly to finish fifth and only 2.15 lengths from the winner. Zouzarella has since franked that form by winning a Listed race at her next start. Caliper then stepped up to 1400 metres at her next start in a 3YOF maiden at Sandown where she finished third and only 1.5 lengths from the winner, Bon’s A Pearla, who went on to win the Group 2 Tranquil Star at her next start. If Caliper has taken natural improvement from her first two runs this preparation and runs up to her overall form lines, she will be too good for this field.