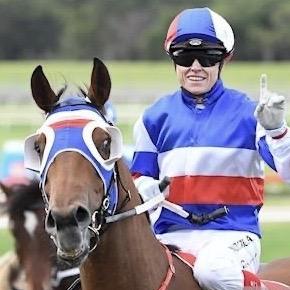 Today I’m riding at Cranbourne. The rail is out 9 metres and the track is rated in the soft range.

Race 2 is the Claire Cook 3YO Maiden Plate over 1200 metres, my ride here is RETURN TO ME who is trained by Danny O’Brien. This daughter of Not a Single Doubt has had one start where she finished midfield on a heavy track at Bendigo on 21stAugust. She started from a low barrier draw on that day and after showing nice natural speed from the barriers settled third in running over 1100 metres. It was a solid enough debut from her in the conditions and it will be interesting to see how she performs on a slightly firmer surface today with the benefit of a first up run under her belt and the slight step up in distance.

Race 5 is the Jordan King BM70 Handicap over 1000 metres, my ride here is GOLDEN GORGE who is trained by Robert Hickmott. This four-year-old gelding by Mossman is raced by Jenny Chapman and David Price, of Price Bloodstock Management. He is lightly raced having had only six starts and has a record of two wins and two third placings, and he subsequently had excuses following his two unplaced runs, so he is a very consistent galloper. This will be his first attempt racing over the short course of 1000 metres but he has won over 1100m. He races here first up today and has winning form on soft ground. He has drawn an economical barrier and I’m hoping that he is fresh enough to utilise the inside draw and travel within his comfort zone. If he races up to his best form, he will make his presence felt.

Race 7 is the Peter McEvoy BM64 Handicap over 1600 metres, my ride here is MONAAFASAH (IRE) who is trained by Chris Waller. This imported five-year-old mare by Cape Cross is raced by Go Racing and partners. She is very lightly raced for her age having had seven starts for a record of one win and a third placing, with both of those being in Europe. I rode her at the end of her first preparation in Australia over 2200 metres at Geelong. This is now her second preparation on Australian soil and she races here second up this campaign. Her first up run saw her finish 4.5 lengths from the winner at Sandown over 1300 metres and she will appreciate the step up in distance today. She will start from a wide barrier and this run will help her progress into her preparation as she continues to step up in distance with racing.