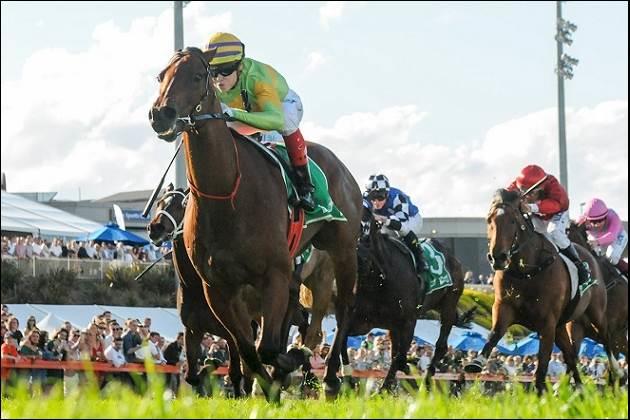 Today I’m riding at Cranbourne for their feature race meeting of the year, where it’s Cranbourne Cup day. This is the second day of their two-day carnival with the Pinker Pinker Plate for fillies and mares being held on Friday night. The rail is out three metres and the track is rated in the good range. The Cranbourne Cup has been a good race for me having won it four times previously, including last year on the same horse that I’m riding today.

Race 2 is the Wilson Medic One Maiden Plate over 1400 metres, my ride here is NOT FOR IZZY who is trained by my father and brother, Allan & Jason Williams. This four-year-old gelding by Love Conquers All is raced by Jenny Chapman and David Price of Price Bloodstock Management. He’s had five starts for three second placings with all of those being last preparation. I’ve ridden him once previously at Sale where we finished second over 1700 metres, he then had one more run and was subsequently sent for a break from training. He races here first up today and has the visors removed from his head gear. He has jumped out nicely in preparation for his first up run and if he can bring that form to the race, and we have luck from a wide barrier draw, he will be very competitive in this.

Race 6 is the Procon Developments Apache Cat Classic over 1000 metres, my ride here is KALKARNI ROYALE who is trained by Kevin Corstens. This four-year-old mare by Nicconi is raced by Bennett Racing. She is lightly raced for her age having had six starts for a record of three wins. She has winning form at the track when she raced over 1200 metres and won on debut at Mornington over this distance when she was a three-year-old. She races here second-up this preparation after a really good first up effort at Caulfield where she finished fourth and half a length from the winner in BM90 mares grade. She will start from a wide barrier against this small field and is a mare that has natural speed. If we have luck in running and she has trained-on since her first-up run she will be one of the main chances in this race.

Race 7 is the De Bortoli Wines BM78 Handicap over 1400 metres, my ride here is GOLDIFOX who is trained by Leon & Troy Corstens. This five-year-old mare by Foxwedge also races in the Bennett Racing colours. She races here third-up today and I had my first ride on her last start where we were successful at Bendigo over 1300 metres in F&M BM70 grade. She steps up a grade today and drops three kilos in weight and the nice gap between runs should suit her as she is very good fresh. I rode her in a recent jumpout in preparation for this race and could feel the confidence she gained from her last start win. She will start from a favourable barrier and steps up slightly in distance from her last run. This is a very competitive field but I like the feel she gave me in her recent jumpout and she should be right in this at this finish.

Race 8 is the Listed TAB Cranbourne Cup over 2025 metres, my ride here is DR DRILL (GB) who is trained by Ciaron Maher & David Eustace. This imported six-year-old gelding by Dansili runs in the colours of Glenvallen Investments. He races here third-up and I have ridden him in both of his runs this preparation. First-up at Caulfield he put in a really solid effort from a wide barrier to finish less than two lengths from the winner over 1700 metres. Second-up we didn’t have any luck from a low barrier draw and I ended up three wide with no cover over 2000 metres, he did have excuses with the run that he had but for a horse of his calibre and ability he was still well beaten finishing last. The stable has reported that he has worked well since then which gives me confidence leading into this race. He will start from barrier one and there looks to be a lot of pressure in this race and he should be afforded every opportunity to gain an energy saving run throughout. On his best form he can go back-to-back in the Cranbourne Cup.