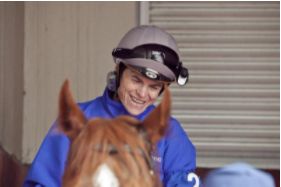 Today I’m riding at Cranbourne. The rail is in the true position and the track is rated in the good range.

Race 2 is the Skye Excavations Maiden Plate over 1400 metres. My ride here is CUBAN LINK who is trained by Greg Eurell. This three-year-old filly by Testa Rossa is having her second start today. I rode her when she made her debut at Pakenham over 1200 metres on the synthetic where she went forward and showed good ability and determination in finishing second, just under half-a-length from the winner. I felt that she would take good benefit from her first experience under raceday conditions as she was under full pressure from the 400 and was solid in her effort to the line. She steps up in distance today and is racing on a turf surface for the first time. She will start from a favourable barrier draw and with the natural improvement from her debut run, should take a lot of beating in this.

Race 3 is the Allied Security Super Vobis Three-Years-Old Maiden Plate over 1200 metres. My ride here is PROWLING who is trained by Greg Eurell. This gelding by Wolf Cry has had one start and I rode him on that occasion. He made his debut at Sandown over 1200 metres where he settled outside the leader and quickened up nicely before getting tired late to finish third, 1.6 lengths from the winner. I felt that he would benefit from the race experience as he was a little bit keen and did a few things wrong under pressure. He will start from a more favourable barrier draw today where he should make his own luck and will be very competitive in the finish.

Race 7 is the R&C Asphalt & Paving Fillies and Mares BM70 Handicap over 1600 metres. My ride here is WHITE HIBISCUS who is trained by Danny O’Brien. This five-year-old mare by Animal Kingdom is raced by Dr Gene Tsoi. She’s had 14 starts for a consistent record of two wins and five placings. She races here fifth-up this preparation and I rode her in her second and third runs this campaign, at Sandown finishing third and at Moonee Valley where we were unplaced. Last start she was only narrowly beaten at Sandown in BM64 F&M grade over the mile with connections making use of a claiming apprentice. She steps back up to BM70 F&M grade today and if she races up to her consistent form will be very competitive in this.