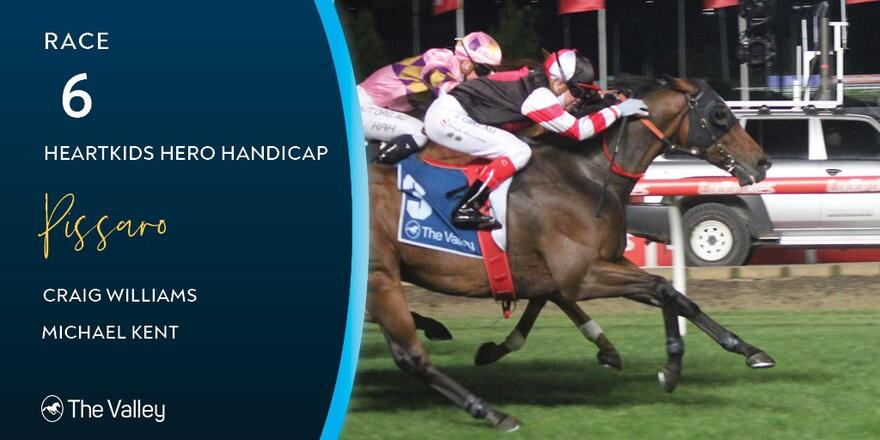 Today I’m riding at Caulfield, the rail is out 3 metres and the track is rated in the good range. There is some poor weather forecast for this afternoon, so I’m looking forward to arriving on course and walking the track. Caulfield is a unique track where the wind direction can be a key factor in how races are run and won.

Race 3 is the BM70 Jodie Burgess Handicap over 2380 metres, my ride here is PISSARO who is trained by Michael Kent. This six-year-old gelding by Pierro is raced by Ray and Sue Montague and partners. He’s had 43 starts for a record of four wins and five placings. I’ve had two rides on him, finishing fourth at Sandown three starts ago before being successful on him at his next run at Moonee Valley over 2500 metres. It was 12 months between wins for him and no doubt his win will be a good confidence booster. Last start he contested the Stayers Final at Moonee Valley finishing fourth over 3000 metres, and he comes into this race a really fit horse that is dropping back in distance. He will start from a favourable barrier draw and if he runs up to his consistent form he will make his presence felt.

Race 4 is the BM70 Warren Moore Handicap over 1200 metres, my ride here is HOUSAY who is trained by Shea Eden. This four-year-old gelding by Zebedee is a lightly raced and progressive galloper with a race record of two wins and two third placings from only five starts, with his only unplaced run being in the BM90 Grey’s race over 1400 metres at Flemington where he finished fifth and just over a length from the winner. I had my first ride on him last start at Moonee Valley finishing third in a BM78 over 1200 metres. We didn’t have any luck in the straight and with clear running I felt that he would have won. He gave me the feel of a horse with good potential and upside and I’m really looking forward to riding him again. He drops back in grade today and stays at the same distance as last start and will start from a wide barrier. If the track is racing fairly and we have luck from the draw, he will be too good for these today.

Race 7 is the BM78 Travis Stillman Handicap over 1400 metres, my ride here is RULE THE WORLD who is trained by Gai Waterhouse & Adrian Bott. This four-year-old gelding by Hallowed Crown is raced by Gooree Stud. He’s had seven starts for three wins and this will be his first time racing the Melbourne way of going. This will be his second-up run this campaign and I’m looking forward to having my first ride on him and seeing how he presents pre-race. He will start from a wide barrier and hopefully he doesn’t have to do too much work in the early stages to take up a position close to the speed.

Race 8 is the BM84 Mia Tiernan Handicap over 1100 metres, my ride here is LANKAN STAR who is trained by Tom Dabernig & Ben Hayes. The races today are named after Members of the Club and as it happens, Mia Tiernan is a friend of my accountant’s daughter, so it would be a great thrill to win this race in her name. Lankan Star is a four-year-old mare by Nicconi with a race record of two wins and three placings from 20 starts, with a win and second placing coming at this track. She is fourth-up this preparation and drops six kilos in weight from her past two runs. She will start from a favourable barrier draw where she will get every opportunity to run her best race. She also has a gear change of the blinkers off and the winkers going on again.

Race 9 is the BM84 Virginia Meyer Handicap over 1600 metres, my ride here is AMADEUS who is trained by Michael Kent. This eight-year-old entire by Amadeus Wolf is raced by Joan Walker. He’s had 38 race starts for a record of five wins, nine second and four third placings with over half-a-million dollars in prizemoney earning. I’ve ridden him throughout his career with success and this will be my first time back on him this preparation. He comes into his fourth up this campaign and is stepping up to the 1600 metres after racing over 1400 at his past two runs. He will start from an inside barrier draw where he should get every favour in running and I expect him to be very competitive.