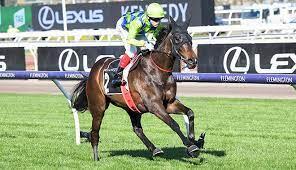 Today I’m riding at Caulfield where it’s the Group 1 Thousand Guineas meeting. The rail is out 9 metres and the track is rated in the good range.

Race 4 is the BM84 BECK Probuild Handicap over 2400 metres. My ride here is EMISSARY (GB) who is trained by Michael Moroney. This five-year-old gelding by Kingman started his career racing in England before being imported to Australia. He’s had a total of seven starts for a record of two wins and three placings. He’s had two starts in Australia and I rode him when he made his debut here in a BM78 over 1800 metres at Sandown where we finished second a narrow second. He then contested the Benalla Cup over 2000 metres and after starting favourite and finishing unplaced, was found to pull up with excuses post-race and that run can be forgiven. This is a very strong contest for BM84 grade and if he bounces back after last start, he will be one the main chances in this grade.

Race 5 is the BM84 Hyland Race Colours Handicap over 1400 metres. My ride here is IL AFFARE (NZ) who is trained by Chris Waller. This four-year-old mare by Dundeel has had 12 starts for a record of two wins and three placings with all of her racing being done in New Zealand. Her connections obviously thought a lot of her as she contested the Group 1 NZ Derby against the boys where she finished fourth and the Group 1 NZ Oaks where she was unplaced. She’s had one official trial in Sydney and a jumpout in preparation for her first-up run and she looks to be going very well. From what I can see of her replays this will be her first time racing the Melbourne way of going and I’ll be mindful of that and help her around the Caulfield track, which can be tricky for first-timers. She is a horse that gets back in her races and the wide barrier draw should be of no disadvantage to her with her racing pattern, and hopefully the race is run to suit her. She carries the light weight of 54 kilos today and if she runs up to her New Zealand form she can make her presence felt.

Race 7 is the feature race, it’s the Group 1 Schweppes Thousand Guineas over 1600 metres for three-year-old fillies. My ride here is BARB RAIDER who is trained by Jerome Hunter. This talented daughter of Rebel Raider is lightly raced and has a record of two wins and two placings from four starts, with her two wins coming at her past two races. I’ve ridden her in all of her runs and love the progression she has made with racing. She was earmarked to head to a 2000 metre race on Saturday, but because this race looked to have dropped away in quality, her trainer was happy to test her at Group 1 level today. She has drawn a favourable barrier and she is a filly that races well on all track surfaces. I’m looking forward to riding her again and she will take a lot of beating in this feature.

Race 8 is the Group 3 Catanach’s Jewellers Ladies’ Day Vase over 1600 metres for mares. My ride here is STARELLE who is trained by Danny O’Brien. This four-year-old mare by More Than Ready is raced by Robert Anderson. She’s had 11 starts for one win and three placings and has won $250,000 in prizemoney. She has been tested in black type company throughout her career and her only win to date has been in the Group 2 Kewney over 1600 metres at Flemington when I was successful on her, a nice way to break her maiden status by winning a Group race. She’s had one run this preparation where she closed off impressively over 1400 metres and the step up in distance today will be to her advantage. She won the Kewney second-up and hopefully she adds to that second-up record today. She will start from a wide barrier draw but she is a mare that is best placed when ridden off the speed, so she will need the track to be playing favourably and fairly for her to be able to close off. There doesn’t look to be too much speed on paper, so that could be a negative for her racing style. If she runs up to her best form she will be one of the main chances.