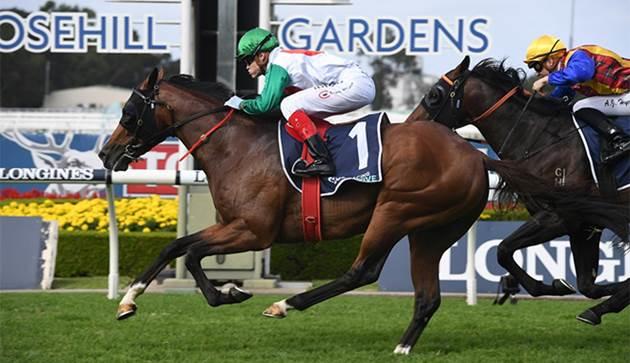 Castelvecchio was ridden aggressively by Craig Williams from barrier five, stalking the pace as opposed to his usual rearward position.

The Guineas was held at a stop-start tempo, with Castelvecchio ($7) poised to pounce under those circumstances, switching off heels under Williams’ guidance around the home turn before coming clear in the straight to win by half a length.

The Anthony Cummings-trained Prince Fawaz ($41) was runner-up, with Reloaded ($10) notching his second G1 placing in finishing third a further 2.5 lengths away.

Shadow Hero ($3.20 favourite) closed from his midfield position for fourth while Warning ($5.50) appeared one-paced from his trailing spot for fifth.

New Zealand Derby winner Sherwood Forest ($14) finished seventh after doing work mid-race while Chenier ($8) was slow to jump from his wide gate and didn’t threaten when crossing the line ninth, more than 10 lengths adrift of Castelvecchio.

“Craig (Williams) is a genius, he had it all worked out and I couldn’t get a word in when I legged him on.

“For me it’s massive, to produce another Group 1 winner is huge for my training career so it’s very special.

“There’s a little bit of pressure, I always say pressure is for tyres but today we felt it and we are just lucky we have a great horse.”

Castelvecchio’s only previous G1 win came in the Champagne Stakes (1600m) at Randwick at the end of his two-year-old season. He will return to Randwick for The Championships and will compete in either the G1 Australian Derby (2400m) on April 4 or G1 Queen Elizabeth Stakes (2000m) a week later.

“We will let his connections make those decisions,” Litt said. “Today it looked like he was running away from them and I think he would eat up the Derby.

“There’s some wonderful prizemoney on offer (so) there’s plenty of thinking to do. Wherever he goes he’s going to be very hard to beat.”

“We ended up four lengths further back than we would have liked in a stop-start affair, the gate was probably the difference,” Parr said.