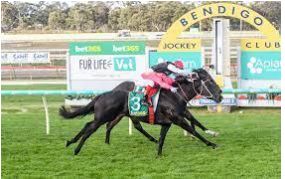 Today I’m riding at Bendigo. The rail is in the true position and the track is rated in the good range.

Race 5 is the Catanach’s Jewellers Fillies and Mares BM70 Hcp over 1300 metres. My ride here is FLYING MASCOT (NZ) who is trained by Tom Dabernig. This four-year-old mare by Tavistock is raced by Flying Start Syndications. She’s had six starts for two wins and two placings with the only two times she has missed a top three placing being when she stepped up to Group 3 and Group 1 company over 1800 and 2000 metres in Adelaide. She is resuming today and has a win and third placing from her two previous first-up runs. She’s had two jumpouts in preparation for her return to the races and has gone impressively in both. She will start from a wide barrier and is a horse that usually races close to the speed and makes her own luck. If she doesn’t have to work too hard from the wide barrier draw and she runs up to her jumpout efforts, she will take a lot of beating in this.

Race 8 is the Silks Events & Functions BM70 Handicap over 1100 metres. My ride here is MORE SECRETS who is trained by Michael, Wayne & John Hawkes. This four-year-old mare by More Than Ready is lightly raced for her age having had just two starts, winning both. I’ve ridden her on both occasions, she was successful first up at Pakenham over 1200 metres and at her next start at this track won a 3YOF BM64 race over 1300 metres. She was then sent for a break from training and is resuming today. I’ve ridden her in two jumpouts in preparation for her return and have been impressed by her development and maturity from her first preparation and I’m really looking forward to seeing her back racing today. She will start from a favourable barrier draw that should give her every opportunity at her first attempt over the 1100 metres. On her form and progression, she is the horse they all have to beat.