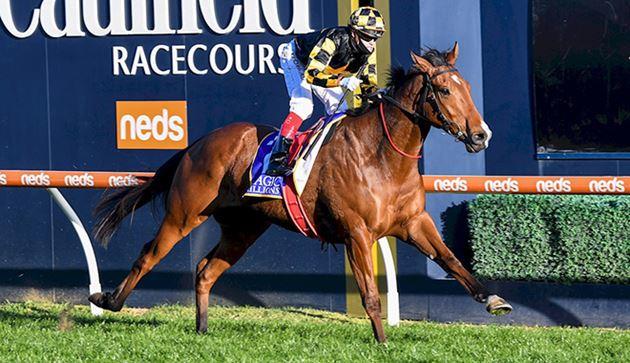 A $6000 yearling, Behemoth cast his impressive shadow over Caulfield on Saturday when the giant galloper claimed the first Victorian Group 1 race of the season, the Memsie Stakes (1400m).

Jockey Craig Williams had Behemoth ($3.30 favourite) positioned in the perfect spot just off the hot pace made by Streets Of Avalon ($15) and Begood Toya Mother ($21), before easing the Adelaide galloper to the middle of the track where he produced an almighty sprint to put the race to bed.

The win was a triumph for trainer David Jolly, who secured his first G1 success since the 2002 Goodwood victory of Zip Zip Aray. Jolly has a list of G1 races on the agenda for the horse that stands 17 hands high.

“That was just brilliant,” Jolly said. “When he landed in the right spot, I thought he’d be hard to beat. When we drew wide, some people thought that wasn’t a good thing, but I was happy. He was able to take a spot and stretch out.

“I said to Craig to use him from the gate, be a little aggressive. It worked out so well. I would have loved to have been there.

“We’ll bring him home and talk about where we go. He does have an entry for the Cox Plate but we’re not sure whether to take a handicap or weight-for-age path with him. I’m very mindful that he was more forward in his preparation than many of the others but it all worked out so well today.

“It’s been a long time since my last Group 1 win – The Goodwood – but I’ve had a few near misses in Adelaide and Melbourne.”