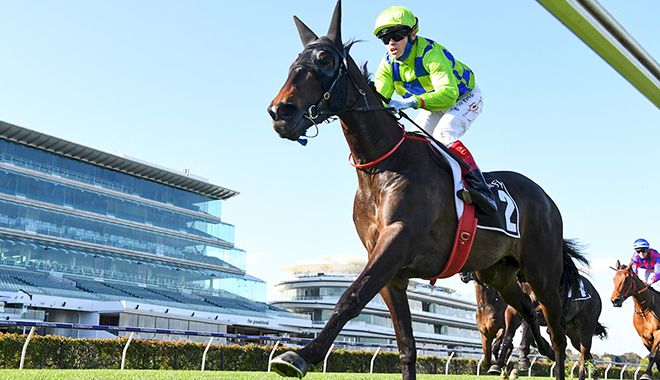 Barb Raider might occupy the third line of betting for next Thursday’s Kennedy Oaks, but Jerome Hunter believes whatever else his Thousand Guineas placegetter achieves for the remainder of the preparation should be seen as a bonus.

Set to line up in Saturday’s traditional Oaks audition the Wakeful Stakes, Hunter changed course when dropping the daughter of Rebel Raider back to 1600 metres last start in the Thousand Guineas after her win in the Oaks Preview over 1800m.

“You virtually could say with the Guineas we changed course because it was a weaker field this year and that was the grand final,” Hunter said.

“She come third in a Group 1 race and whatever she does now is just a bonus really.

“We knew she could run out a strong mile, so we’ve done that.

“Everything is a bonus since the Guineas I reckon.”

Hunter opted to bypass last Saturday’s Vase at The Valley in preference for Flemington this Saturday and suggests a conservative ride will help Craig Williams give him the indication he needs to push onto the Kennedy Oaks five days later.

“She’s had a good 2.5 weeks between runs and I’m happy to go there and if we run a good race, we will think about how she pulls up and head towards the Oaks,” Hunter explained.

“It was a good hit-out from the Guineas and we’ve got that fitness from the 1800 metres, so 2000 metres won’t be a problem, we have just kept her happy and ticking over.

“She won’t be going out hard like she did in the Guineas, they went out hard and she went out with them, whereas I’d rather he just get a rhythm and put her to sleep and see if she can run out a strong 2000 metres.

“It depends on the speed, she might still be sitting fourth or fifth but just not having to hold that front position like she did in the Guineas.

“You’re scratching your head if you’ve run a hard race and burnt the candle both ends like she did in the Guineas and she fades the last 100 metres on Saturday, then you are going I wonder if she can run 2500 metres out?”

Hunter is following the same path used by last year’s VRC Oaks winner Personal via the Thousand Guineas into the Wakeful Stakes.

The Thousand Guineas was Hunter’s fourth G1 starter and first placing at the elite level.

“It’s like an Oaks Trial isn’t it, only five days before the Oaks really.

“You’ve got to treat them all the same, but she’s definitely had the most attention in the last six months.

“I’m very confident with the way she’s going, touchwood she hasn’t put a foot wrong and every run she’s had, it’s been a great run and I’m being very positive with the horse.

“She hasn’t faltered this campaign, so let’s hope she keeps on going until the Oaks.”

Barb Raider is a $7 chance with Sportsbet for Saturday’s Wakeful Stakes.