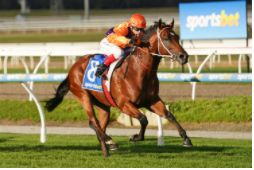 Today I’m riding at Ballarat. The rail is out 8 metres from the 600m to the winning post and returns to the true position for the remainder with the track rated in the soft range.

Race 2 is the Sam Miranda Maiden Plate over 1200 metres. My ride here is MIRACLE DAY who is trained by Robert Hickmott. This three-year-old gelding by Street Boss is raced by Leo To. He is lightly raced having had only four starts for a record of a second and third placing. I’ve ridden him in two race starts, once as a two-year-old and more recently when he resumed this preparation as a three-year-old. He presented as a very fresh horse first up after a long spell at Sandown and got himself very worked up in the mounting yard and prior to the race. Given how fresh he was, he did a really good job to finish third and just over two lengths from the winner. Since his first-up run he has had an official trial at Cranbourne where he went extremely well and the stable reported that he handled the trip away and semi raceday like conditions well, so that will hold him in good stead for his second up run. If he handles himself pre-race with the addition of pre-race ear muffs for the first time and we have luck from the wide barrier draw he is the horse they all have to beat.

Race 4 is the Suez Maiden Plate over 2000 metres. My ride here is SANTADEAL who is trained by Michael, Wayne & John Hawkes. This three-year-old gelding by Dundeel is raced by Orbis Bloodstock. He’s had one start where I rode him on debut at Pakenham on soft ground over 1400 metres to finish second and five lengths from the winner. I was really pleased with his debut effort and was happy with how strong he was to and through the line. He is stepping up in distance today and will start from a wide barrier, but I expect that he is a three-year-old with above average staying ability and he will have taken natural improvement from his debut effort. I’m looking forward to seeing how he has progressed between runs and what path he finds himself on for the rest of the season.

Race 5 is the Porter Plant Super Vobis Two-Years-Old Handicap over 1400 metres. My ride here is PATTON who is trained by Michael, Wayne & John Hawkes. This colt by American Pharoah is raced by Spendthrift Australia. I rode him when he made his debut at Pakenham on soft ground over 1200 metres where he won by an official margin of 1.25 lengths. I had ridden him in trackwork and jumpouts prior to his debut run and have always liked the feel he gave me and his very professional attitude. He started from a low barrier draw on debut and after stepping away slightly slowly from the barriers he got back in the field and was off the bridle, but was superior when asked for an effort and I felt that he had a lot left to offer. He is stepping up to the 1400 metres for his second run and will start from a wide barrier toady. We will need some luck from the barrier draw but I am very confident in his ability and if he has trained-on they will find it hard to beat him.

Race 7 is the Sportsbet Same Game Multi BM78 Handicap over 1600 metres. My ride here is CARRIE (JPN) who is trained by Danny O’Brien. This five-year-old imported mare by Manhattan Cafe (JPN) is raced by Robert Anderson. She started her career racing in Japan before being imported to Australia in 2019. She has an overall record of three wins and two second placings from 11 starts and is racing first-up today. Her record when racing fresh is a win and a second placing from three attempts. She is a mare that races well on all track conditions with her three wins coming on good, soft and heavy ground and she is a winner at her only attempt over this distance. She can sometimes step slowly from the barriers so I’m hoping I can get her to jump on terms and utilise the inside barrier draw. I’m looking forward to having my first ride on her and all her form references indicate that she will be one of the main chances in this.