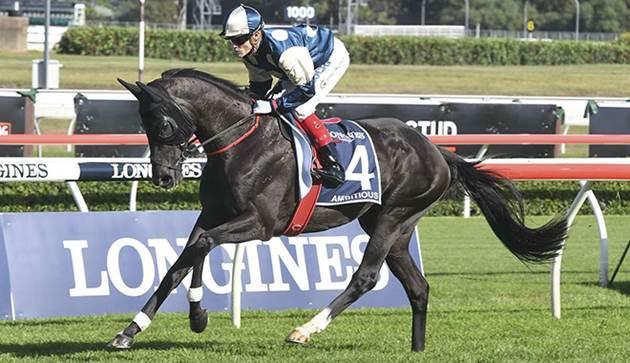 Favourite Ambitious has completed his final piece of work for Saturday’s $650,000 Hardy Brothers Doomben Cup (2000m), and there is confidence the Japanese import is ready to strike it hot fourth-up.

It is not often a horse that is winless for more than two years – Ambitious’ last racetrack success was in the Group 2 Osaka Hai (2000m) at Hanshin in April 2016 – comes up favourite for a Group 1, but Anthony Freedman’s charge has done just that.

But the stable aren’t shying away from that being a correct spot for him in the market, having finished second to Almandin in the G1 Tancred Stakes (2400m) during the Sydney Carnival and with excuses out of his underwhelming Queen Elizabeth Stakes run.

“We certainly think he’s got a very good chance of winning a race like this,” Freedman’s racing manager Brad Taylor said.

“We put him in the QE thinking he was a good chance after his run in the Tancred, but he didn’t get all favours – he lost three shoes in running in the QE, which doesn’t help any horses.

“If everything goes to plan on Saturday, he should be a big chance.”

He added: “He’s really thrived up there, the warmer weather – he’s still acclimatising to the Australian environment.

“He’s really enjoyed his time at Aquis Farm up there, he went into Doomben this morning and galloped on the course proper, and all reports from Sam [Freedman] up there was he galloped really well.

“He’ll line up as a really good chance.

“He doesn’t face as strong a field as he did in the QE, but Oregon’s Day was pretty impressive the other day, and there’s a couple of other nice horses in there.

“He’ll certainly get his chance to win a Group 1 in Australia.”