‘Willo’ excels in the wind 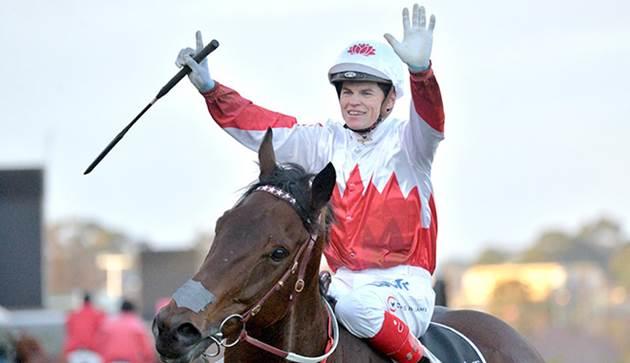 Not even some wintry conditions at Headquarters could fluster the 41-year-old – in fact, he used them to his advantage several times to get the best out of his horses – each of Mintha (Tony McEvoy), Sixties Groove (Darren Weir), Miss Gunpowder (Lindsay Park), Falago (Weir), Magic Consol (Paul Preusker) and Camdus (Weir) all winning for him.

However, that doesn’t stop Hayes and Williams from continuing to combine in this era, and they did so again on Saturday as Williams dutifully partnered topweight Miss Gunpowder to victory in the Leilani Series Final (1400m).

“He gets into the zone doesn’t he?” Hayes said.

“He works hard at getting onto the right horses. You want him on at this time of the year.”

Williams delivered for favourite backers in the opening two events, with Mintha ($2.80) and Sixties Groove ($1.65) – the star hoop not just winning either, the race-to-race treble that also featured Miss Gunpowder coming by a collective seven lengths. Overall, Williams’ six winners were a shade under nine lengths.

McEvoy, trainer of Mintha, said: “I’ve got to commend Craig. He’s such a professional.

“As soon as noms came out, he was straight on the phone to me – he never rings me.

“He said, ‘I want to ride your two horses today. I think they’re the best chances in those races. I’m trying to win this premiership. Can I ride them?’ I said, ‘yes of course’.

“Then he’s come and delivered that [Mintha] for me, so he’s a real pro.

He added in jest: “I’m sure he won’t take his fee from that, because it was so easy.”

Williams’ sextet saw him increase his lead on his rivals in terms of the premiership, and was a huge push to see him reach double-figures in city winners in a month – which he has done an astounding 11 times in the past decade, especially when you factor in his big-race commitments in other jurisdictions that he always takes up.

After Saturday, he’s already up to nine city winners in July in just two meetings – having ridden a treble in mid-week.

It took the strongest of rides from Luke Nolen aboard Good ‘N’ Fast to see off the Williams-ridden Scottish Rogue, Williams narrowly missing in his attempt to chalk up a double for the McEvoy stable in the Taj Rossi Series Final (1600m).

Damian Lane, Williams’ closest rival in the premiership standings, not only had no luck in the Taj Rossi aboard Inkslinger for trainer Brian McGrath, he was very nearly unseated – and it took some fine balance and poise for Lane to avoid a fall in the home straight.

And Williams got the bob over Dean Yendall’s mount in the tightest of photos.

His tally on his past three days riding on Winter Finals Day is now up to 14 winners – yes, he has won more than 50 per cent of the races across those three days.

Falago has featured twice of those 14 too – Williams having ridden him to victory in the 2000-metre race three years back – while the other piece of synchronicity was signing off on his five- and six-timers on Winter Finals Day with a victory for Waratah Thoroughbreds – Telopea in 2016, and Camdus this year.

“It’s obviously a big break [Williams’ lead] at this time of year – if it [the premiership] wasn’t in the back of my mind before, it certainly is now,” Lane said.