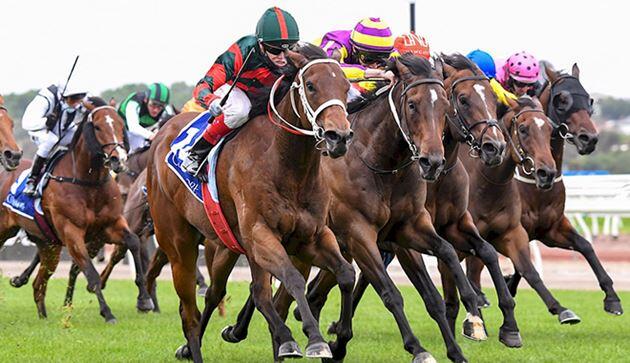 It’s one of the country’s leading stallion-making races but the Coolmore Stud Stakes was dominated by fillies at Flemington on Saturday with Chris Waller’s flyer September Run racing away to score a soft victory.

Just three fillies took on the colts in the $1.5 million sprint and they finished first (September Run), second (Swats That) and fourth (Muntaseera).

Jockey Craig Williams said he was once again taken by the Exceed And Excel filly’s acceleration after she pounced on the leaders and raced clear.

“I knew if we get the first half right we know what acceleration she’s got and we really saw that today.

“I’m just sad in this pandemic that we can’t get people to the races, but I’m proud to be an Australian, especially a Victorian, through this COVID-19 period.

“There’s been a lot of goodwill from the people at home watching these great stories and these great elite athletes in these thoroughbred athletes.”

Waller was watching the race from Sydney and had few moments of worry.

“She was a step behind the Sydney fillies (earlier) so we sent her down there and she’s since created her own legacy,” Waller said.

“That was a good field today. Today didn’t surprise me. I thought her last-start win was very good. She hasn’t fallen in, she’s dead-set attacked the line.

“When you’re attacking the line up the straight at Flemington it is always a good sign towards a race like this.”

Waller’s Melbourne foreman Jo Taylor said: “She’s just gone to the next level at every start and every task that we’ve put in front of her. She’s stepped up to the plate and she showed that today.

“I thought the vital part was getting the first part of this race right, which we did, and we knew that she would be lightning quick over the concluding stages.

“Today she jumped really well and it looked like she was going to get (off) to a flyer, but she did that in her jumpout a week ago as well but Craig was sure to keep the top screwed up nice and tight until the right moment. When he produced her, she certainly showed her class.

“She has almost gotten stronger as a young filly, there’s more furnishing to happen with her and there’s no reason why she still can’t keep going to bigger heights after this preparation.”

You can view the full article here