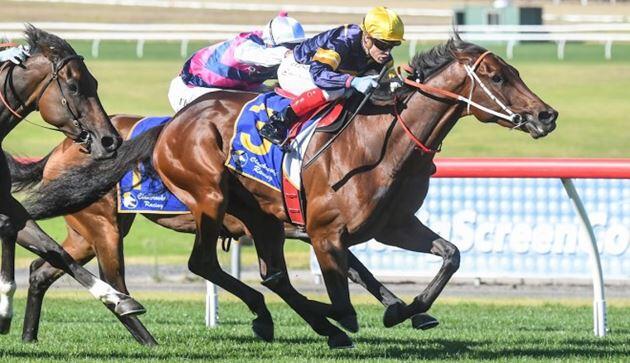 Prepared by Hawkes Racing and guided to victory by Craig Williams, Pale King raced outside the lead in a slowly run 1600-metre $50,000 Benchmark 70 Handicap and quickened best in the home straight to score narrowly.

Summit Reach, a British import at his Australian debut for Chris Waller, firmed from $3.30 into $2.50 favourite but after settling in the box-seat under Damian Lane but wasn’t suited by the sit-sprint tempo and ran last in the seven-horse field.

“He’s just a horse at this stage of his career that knows how to put them away,” Williams said of Pale King.

“I got to sit on his back again the other day, he still feels like he’s developing, physically and mentally, and again it was another step in the right direction.

“They’ve managed him really well and put a lot of speed into the horse and reaping the rewards.”

Wayne Hawkes heavily inferred that Pale King could be destined to be racing in stakes company later in his career.

“He’s going pretty nice, I don’t think you’ll see him have too many more starts at Sandown put it that way,” Hawkes quipped.

Pale King was trained by David Simcock and owned by a partnership which included prominent bloodstock agent Stephen Hillen when winning over 2414 metres at Lingfield in March 2020.

The Dabirsim colt settled in the second half of the eight-horse field before creeping into the race ominously under a trademark ice-cool Jamie Spencer ride.

Spencer took three exaggerated glances over his shoulder inside the final 600 metres before allowing his mount to win by 1.75 lengths.

Pale King joined Hawkes Racing towards the end of last year, winning his Australian debut over 1600 metres at Kembla Grange on October 10.

“He won his first start at Lingfield and then COVID-19 hit and his owners decided to sell him quick so we were just lucky because they were going to keep him on and race him in England for 12 more months. We’ve got him 12 months early if we’re being totally fair,” Hawkes said.