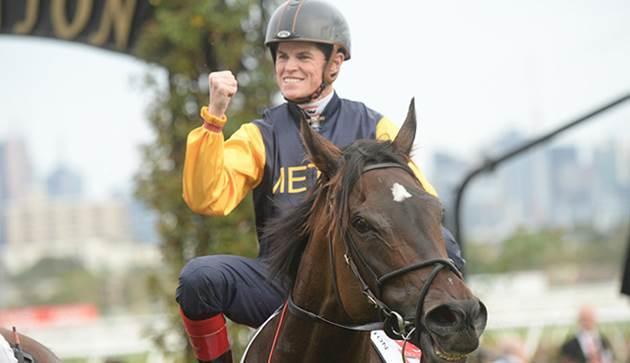 Winners are grinners so the inaugural victor of the jockeys’ challenge, Craig Williams, was always going to enjoy the inaugural Rapid Racing day at Flemington on Sunday.

A last-race win for double points forced Williams into a tie on nine points with Jye McNeil but Williams was awarded the title on a countback as he lifted the metro jockeys team to a six-point victory – 43 to 37 – over their country counterparts.

“We are happy to embrace concepts at the right time and people got out here and had a great day and that’s what we want,” Williams said.

“We want new people getting involved in racing and having a taste of what we love.”

“It’s been a pretty tough schedule for all participants in racing, this is the third city meeting in a row and it was hard getting out of bed this morning,” Williams said.

“All the jockeys have been feeling it and not just the jockeys – the trainers and the strappers as well.

“It was only when Denis walked in and gave us some motivation that we came alive. You could see all the spirits lifting.”

Mick Price and Michael Kent Jr were awarded the trainers’ prize after gathering seven points and winning on a countback from the Lindsay Park stable.

“The atmosphere is great down here – very relaxed,” Thompson said. “The racing is coming through thick and fast and there’s been some good stories around the country and metro (jockeys) so I’m really enjoying it.

“It’s great to try new things and there’s been plenty of feedback as well about the day and about the silks and the time of the day and we’ll take all of that on board. But, as a concept, the fundamentals are there, and it’s been a good day.