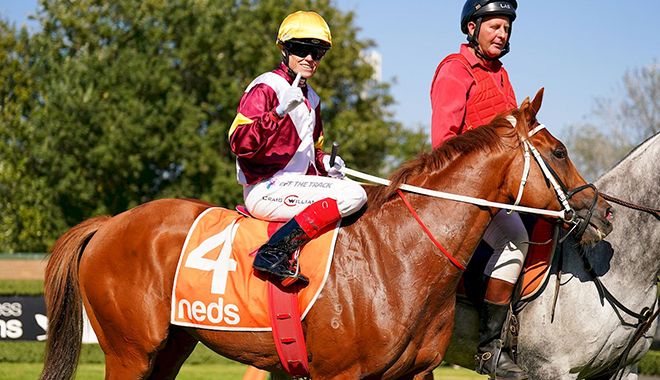 The day after Williams won his second Group 1 aboard stablemate September Run in the William Reid Stakes (1200m) at The Valley, Crystal Pegasus was patiently steered to victory in the $300,000 Listed Neds Mornington Cup (2400m).

Williams positioned Crystal Pegasus ($2.90) fifth behind Pondus ($2 favourite) and stalked his market rival into the race.

Crystal Pegasus joined Pondus on straightening and then outstayed him over the final 200 metres with the advantage of 3.5kg to win by a widening 1.25 lengths. Dual Canberra Cup placegetter Dadoozdart ($16) ran third, a further 1.75 lengths away.

European imports had won the previous two Mornington Cups and dominated Saturday’s race, providing the trifecta in the seven-horse field.

Williams revealed it was his plan to follow Pondus into the race from the outset.

“We just had a bit of negotiation of how to do that from the draw,” Williams said.

“This is my first time on this fella and it’s good to get to understand his characteristics, but he’s in really good form and it’s not easy to win four in a row – two Listed races and the Mornington Cup around this track.

“He was welcome to the challenge late. He’s a willing competitor and it was good to be on him.”

“We’ll have a look at how he pulls up and how it fits in to his program now, but that is the plan. Take him home, wrap him up in cotton wool and get him up to Sydney in one piece for Chris (Waller),” said Waller’s Melbourne stable foreperson Jo Taylor.

Crystal Pegasus is handicapped with 50kg for the Sydney Cup but is likely to be given a weight penalty following his Mornington Cup win.

Williams has ridden seven winners from his past 19 rides for the stable, with three of those victories in Stakes company.