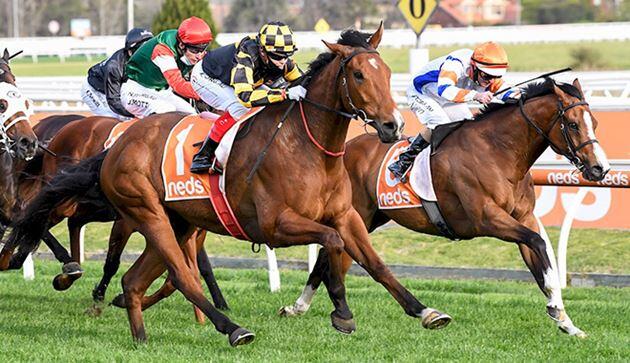 Behemoth confirmed himself as an elite sprinter after adding the Group 1 Sir Rupert Clarke Stakes to his ground-breaking $1 million Memsie Stakes win at Caulfield on Saturday.

Unlike his Memsie victory on August 29, when Behemoth was always in contention, the gigantic galloper appeared out of the picture at the 200-metre mark, along with most of his rivals as Dollar For Dollar ran clear.

But the huge South Australian horse, who had the task of lumping topweight of 60 kilograms, then emerged, opening up a gap in the middle of the track for jockey Craig Williams and charging to the line.

Williams also joined rival Damien Oliver as a six-time winner of the race.

Trainer David Jolly watched from South Australia as his best horse handled his G1 opposition with some ease.

“He’s a dream come true to think what he’s doing at the moment,” Jolly said.

“It’s amazing. I just wish I was there, but it was great watching it on the couch with the family, too. It’s an amazing feeling winning these races with him now. He’s a fantastic horse.”

Jolly said he was hopeful the horse can add to his tally of two G1 wins already this spring.

“We’ve got a few options now and I’ll talk to Craig (Williams),” he said. “It’s a good problem to have in that we could train him to go back in distance or step up.

“We decided not to be as aggressive from the gate today as we were last time because of the better barrier draw. The 1400 (metres) is a great distance for him but we’ve got options.

“He’s versatile and we can train him accordingly.”

For Williams, his victory continues a remarkable association his family has with the race.

His father Allan rode the 1979 winner Private Talk and four years later trained the winner Black Rouge, while for Craig, his first win in the race was in 2005 on Barely A Moment.

He won again the following year on Rewaaya and again in 2010 on Response before 12 months later doing so again on Toorak Toff. His previous win in the race came on Stratum Star in 2013.

“I’m just lucky that it’s been a really good race for me,” he said. “It’s been a great race for my family as my family won it as a jockey and a trainer.”