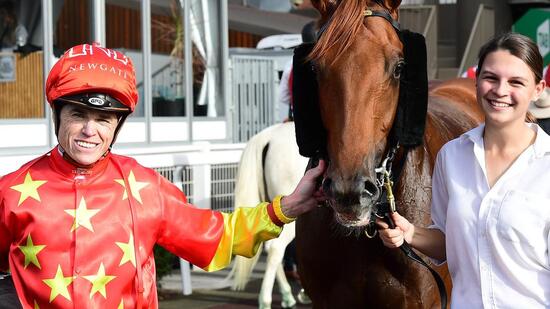 Memories of the great Mahogany came flooding back for Michael Freedman as the trainer and his brother Richard reinforced their reputation as the current kings of two-year-old racing with Tiger Of Malay’s win in the $1 million BRC Sires’ Produce Stakes.

Tiger Of Malay is no Mahogany but Freedman, who has trained in Singapore and Hong Kong in recent times, reckons he hasn’t been on track in Brisbane in 15 years and says the last big race he won in the Sunshine State was almost three decades ago with Mahogany.

The Freedmans, who have enjoyed a freakishly good season with their two-year-olds highlighted by a Golden Slipper win with Stay Inside, now have a serious chance with another juvenile in a Group 1 race.

Bookies cut Tiger Of Malay’s price from $21 to $7 in the Group 1 JJ Atkins (1600m) in a fortnight and jockey Craig Williams believes the colt will relish the extra 200m of that race.

Gai Waterhouse and Adrian Bott’s Frankel gelding Converge turned in a slashing JJ trial when storming home from second last to finish runner-up in the Sires’.

Jockey Tim Clark said he “was shattered he got beat” in the Sires’, with bookies moving to make Converge the new $4 JJ Atkins favourite.

But to the winner goes the spoils and the Sires’ was another rich score for the Freedman team in their stellar season.

“I think it’s at least 15 years since I’ve been here, it’s a big thrill to come back and win a race like this,” Michael Freedman said.

“I think the last big race that we won, that I was involved with, would have been Mahogany.

“We had to regroup a bit with this horse after the Sires’ in Sydney because he drew wide in that race, he had the blinkers on and he over-raced a bit and finished out the back.

“We thought Brisbane was a nice option, I’ve always had a good opinion of the horse he just hasn’t had a lot of luck with barriers and tracks.”

Williams was the beneficiary of the pick-up ride on Tiger Of Malay, with Mark Zahra staying in Melbourne with his newborn baby and with Queensland closing its borders to Victoria.

Williams revealed he will base himself in Queensland for the next two weeks to try to pick off some lucrative carnival spoils, hoping to keep the ride on Tiger Of Malay in the JJ Atkins.

“I was always going to come up here and stay for a bit in Queensland due to the calibre of racing here over the next fortnight, but I came a little bit earlier because of the (Victorian) lockdown,” Williams said.

“The way this horse felt today I think he will love the mile of the JJ.

“Late he might have been vulnerable today but to get him into a position it took a lot of riding and I think he’s got a lot of scope.”