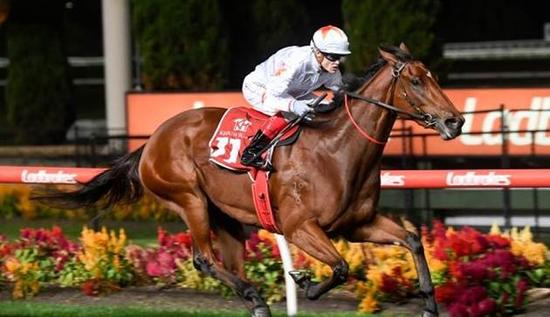 What the track lacked in energy with the COVID-19 lockout preventing punters from attending the race meeting, the gun three-year-olds made up for on the track as they matched motors out of the gates.

So intense was their battle on the speed that the assumed leader Pippie wasn’t unable to cross from her wide gate and was instead ridden to stalk the pair under Ben Melham.

Loving Gaby looked to be travelling better than all of her rivals as the field turned for home and quickly put a winning margin on her rivals when Craig Williams asked her for a final effort inside the final 200m.

Trainer Ciaron Maher praised the fortitude of the daughter of I Am Invincible, who has now won two Group 1 races under lights at The Valley.

“She just seems to love The Valley,” Maher said.

“I thought the key to this race was going to be the start and he (Craig Williams) had to be quite forceful with her to get her into the position and I think that was the difference.

“She looked to be travelling quite well and Bivouac started to fade on the corner, he’s a high quality horse Bivouac but it was her night tonight.”

Maher confirmed the Group 1 T.J. Smith Stakes (1200m) at Randwick would be Loving Gaby’s next target and hinted the filly could be aimed at the $7.5 million Golden Eagle (1500m) during the spring.

Gordon Richards indicated that runner-up Gytrash would return to Adelaide for a possible tilt at The Goodwood, while Pippie (fourth) and Mystic Journey (fifth) could also head to Morphettville in May for the Group 1 Robert Sangster Stakes (1200m).