King Of Hastings impresses at Caulfield 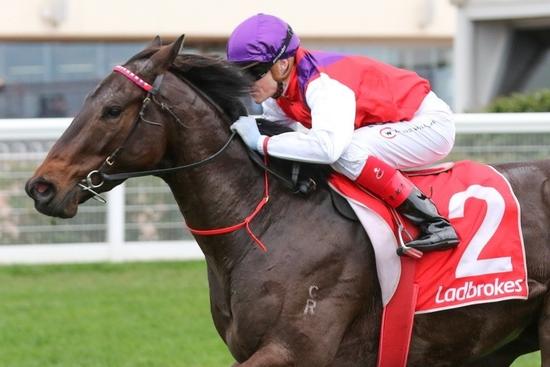 King Of Hastings is likely to get his chance to target the spring after becoming the latest two-year-old from the Anthony Freedman stable to win in town this season.

With champion jockey Craig Williams aboard, King Of Hastings was a bit slowly away in Saturday’s Ladbrokes Odds Boost Handicap (1200m) at Caulfield, which meant he settled further back than had been anticipated.

But the well-supported $2.50 favourite worked into the race strongly around the outside of the field rounding the home turn before getting the better of the previously unbeaten Sizzlefly in the final 50m.

Sizzlefly ($2.60), who was posted three-wide without cover before hitting the front in the straight, finished 1-1/4 lengths away second while Debutant Stakes winner Champagne Boom was another short neck away third.

King Of Hastings took his overall record to two wins and a second from three starts having won impressively at Cranbourne on debut last month before a narrow defeat at Sandown after leading.

The victory continued a successful season for the Freedman stable with its two-year-olds.

The stable has won city races with the likes of Group One Blue Diamond Stakes winner Lyre, dual stakes-winning colt I Am Immortal and promising youngsters Chenier, Super Seth and Meuse.

“Anthony is away at the moment so I’ll be in touch with him later today and we’ll map a plan with him,” Sam Freedman said.

“But he’s probably earned his chance at some nicer races in the spring.

“It’s winter racing still, so we are not getting too carried away, but we always liked him from day one.

“He took a while to grow and he’s probably still growing now and has still got improvement as a three-year-old.”

“He’ll measure up to the spring,” Williams said.