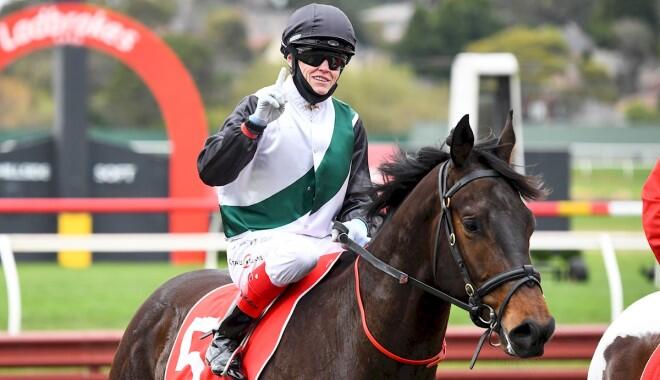 Sandy Prince gave the Hayes family cause to celebrate yet again on Wednesday, notching successive wins at Sandown Hillside.

Trained by Ben and JD Hayes, Sandy Prince is part-owned by their brother Will, who manages a syndicate which includes teammates from his current AFL club the Western Bulldogs.

Their father and Australian Hall of Fame trainer David Hayes is also listed in the ownership of Sandy Price, whose newfound winning form may even prompt consideration to join his Hong Kong stable.

“He was stepping up in class and it was a good field with five last-start winners.”

Sandy Prince ($3.30) led at a steady pace under Craig Williams, completing his first 800 metres in 51.71 seconds before quickening to run the section between the 600 and 200-metre marks in 22.25s, which was enough to clinch a comfortable win.

Sandy Prince defeated Sealion ($4.20), who settled outside the lead, by 2.25 lengths, with Saint Tropez ($12) a further length away in third after tracking the winner from the inside barrier.

“He did get everything his own way but he still won and did so impressively, I really liked how he ran out the 1400 metres so strong,” Hayes said.

“He’s a horse that has been improving every start and today he did everything right.

“His manners were good and he was good through the line. I think that was an important step seeing him do that today. He might be putting his hand up to run in some of those nice spring races.”

Sandy Prince holds nominations for the Caulfield Guineas and Golden Rose and there’s no shortage of options available for his next start within the next few weeks, primarily a $130,000 three-year-old handicap over 1500m at The Valley on September 4 and the $160,000 Listed Exford Plate (1400m) at Flemington seven days later.

“His management has allowed him to develop in the right way and again, he was well placed,” Williams said.

“I know he’s going to get to the deep end and a high rating, it’s just a matter of when he gets there and he’s still learning on the way.”

Sandy Prince was runner-up in his first three starts in maidens at Ballarat and Geelong before winning his maiden at Moe on a Heavy 10 surface second-up this campaign on August 4.